Bihar Election 2020: The BJP has been maintaining that the ruling National Democratic Alliance is intact in the state and has stuck to Nitish Kumar's projection as its chief ministerial face. 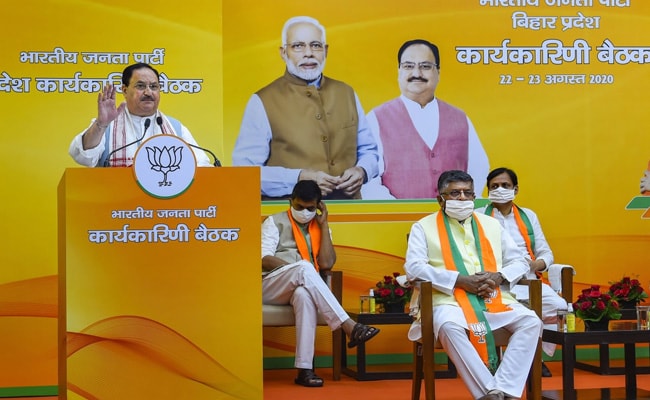 BJP President J P Nadda said on Sunday that all three NDA constituents in Bihar, the JD(U), LJP and his party, will fight the coming assembly polls in the state together with Chief Minister Nitish Kumar as the face of the alliance, and expressed confidence that it will emerge victorious.

JP Nadda's remarks at a virtual meet of the Bihar BJP comes amid a bitter war of words between Nitish Kumar's JD(U) and Chirag Paswan-headed LJP.

The BJP has been maintaining that the ruling National Democratic Alliance is intact in the state and has stuck to Nitish Kumar's projection as its chief ministerial face. JP Nadda also claimed that the opposition in Bihar as well as elsewhere has become a "spent force" and asserted that the BJP is the only party which is being looked at by people with hope.

The opposition has neither ideology nor vision nor any spirit to serve people, and it can't rise above petty politics, he added.

He praised the Bihar government''s handling of the COVID-19 pandemic and floods in the state.

The special package announced by Prime Minister Narendra Modi has been implemented in "letter and spirit", he said, asking the state BJP to go to people with its details.

JP Nadda also shared details of the Modi government's work to boost health care measures to battle the pandemic and to provide relief to people, especially the poor, with several packages.

Assembly elections in the state are due in October-November.