Bhima-Koregaon case: The Maharashtra police filed a 5,600-page chargesheet at a Pune court in November.

The Elgar Parishad was held on December 31 to mark the anniversary of the battle of Bhima Koregaon.

The chargesheet filed against an assortment of lawyers, activists, poets and professors arrested in June and charged with Maoist links has thrown up multiple weak links, NDTV has found.

Activists Sudhir Dhavale, Rona Wilson, Surendra Gadling, Shoma Sen and Mahesh Raut were arrested on charges of inciting the Bhima-Koregaon riots or the caste clashes that broke out at a gathering in Bhima Koregaon village near Pune on January 1, in which one person was killed and several others were injured.

In November, the Maharashtra police filed a 5,600-page chargesheet at a Pune court. The chargesheet goes well beyond the caste violence and alleges a Maoist conspiracy to stage violent attacks including a plot to kill Prime Minister Narendra Modi.

To back this, the police have filed evidence including purported seizures from raids on the activists, letters, call record details, statements of police officers and people involved in the organisation of Elgar Parishad - an event held on December 31 to mark the anniversary of the battle of Bhima Koregaon.

For the core charge that the accused made hate speeches and distributed incendiary propaganda material, the police have only attached pamphlets distributed at the venue.

The pamphlets have no reference to Maoist activity; most of it is material that is anti-BJP and anti-RSS. 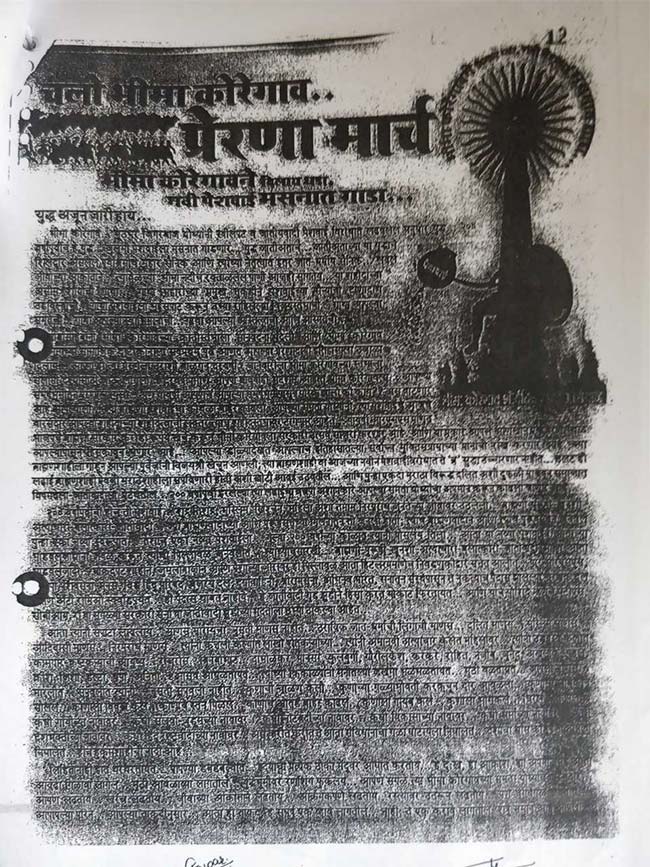 Bhima-Koregon case: The pamphlets attached by the police have no reference to Maoist activity.

To back its claim that the accused funded the event, the police have attached 50 statements that were examined by NDTV.

The statements do not support that claim, they just confirm that 250 organisation raised funds for the event.

Six people from Dalit and other social organisations have testified that the event was organised by two retired High Court judges, Justice PB Sawant and Justice Kolse Patil.

But the police haven't recorded the judges' statements, the lawyers for the accused say.

The police have also not supplied fresh proof to back the most sensational of its claims - that the accused plotted to kill Prime Minister Narendra Modi.

That accusation pivoted around a letter between Comrade 'R' and Comrade Prakash. "Comrade Kisan and few others senior comrades have proposed concrete steps to end Modi-Raj. We are thinking along the lines of another Rajiv Gandhi-type incident," the letter read.

The authenticity of that - as well as other letters released to the media - has been questioned by experts on grounds that there was explicit mention of strategies and names and the lack of coded language in what should be a top secret communication. Despite that letter entering the public domain five months ago, the chargesheet has no additional material to back the assassination plot charge.

Two volumes of call records of the accused attached to the chargesheet also do not appear to establish a Maoist link. Phone numbers are listed with tower locations specified for only a few of them.

When questioned on the gaps in the chargesheet, investigating officer Shivaji Pawar said he could comment on it now but that "we would explain how to link the statements and the letters and the rest of the material during the trial".