Videos Of Bhima-Koregaon Speeches Offer A Rebuttal To 'Maoist' Claim

Ten people have been arrested by Pune Police and 17 raided across six states in the last four months for their alleged role in the Elgar Parishad, and in a wider Maoist conspiracy.

Jignesh Mewani and Umer Khalid spoke for over 20 minutes at the Elgar Parishad gathering.

A gathering of activists in Pune labelled as a Maoist plot pledged to protect the Constitution, according to video reviewed by NDTV. The gathering, known as the Elgar Parishad, held towards the end of December last year, is the basis of a nationwide police crackdown on activists and intellectuals accused of plotting Maoist violence.

Police claim speeches given at the Elgar Parishad set the stage for violence next day in the village of Bhima Koregaon near Pune, where one person was killed in inter-caste clashes.

Ten people have been arrested by Pune Police and 17 raided across six states in the last four months for their alleged role in the Parishad, and in a wider Maoist conspiracy.

But videos of the event, uploaded on the event's Facebook page and reviewed by NDTV suggest otherwise.

The Elgar Parishad ended with the following pledge: "Today, on the occasion of Shaurya Divas (Victory Day) in Bhima Koregaon on the 200th anniversary, we pledge that we will protect the Constitution and democracy." 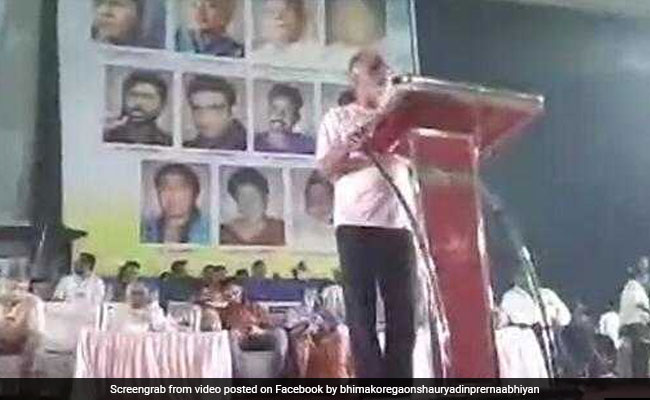 Police claim speeches given at the Elgar Parishad set the stage for the Bhima Koregaon violence.

"We will not support those (organisations) who speak against the Constitution or oppose the constitution. We will never vote for opponents of the Constitution, the RSS and BJP," the gathering pledged.

The pledge was led by read out by Harshali Potdar, a Leftist activist, ironically named in one of the First Information Reports (FIR) as a Maoist sympathiser.

Another FIR filed in connection with the case names Gujarat Congress legislator Jignesh Mewani and student activist Umar Khalid for giving provocative speeches at the Parishad that further a Maoist agenda.

In their over 20-minute-long speeches, however, both Mr Mewani and Mr Khalid spoke of upholding the Constitution and saving democracy - by uprooting the Narendra Modi-led government and the RSS.

"If all come together as one, Modiji will be uprooted 110%. We will save democracy and the constitution," Mr Mewani said in his speech.

"In these times, our duty is to not only save the democracy and the Constitution but also save humanity. Humanity is in danger," Mr Khalid said.

However, a speech by Sudhir Dhavale, poet and editor of the Left-leaning Marathi magazine 'Vidrohi', and one of the five people arrested in June this year was more provocative.

"If there is exploitation, there should be rebellion...And if there is no rebellion, then it is better than this city burns to ashes before sunrise," he said. "We will have to free ourselves from the RSS," he continued.

One of the organisers of the Parishad, Justice Kolse-Patil, a retired judge of the Bombay High Court defended Mr Dhavale's speech.

"It is part of a poem, he is poetic person. He is a Leftist and he has been writing against capitalism. Why will he talk about burning of some city in front of us?," he said.