Ashok Kamble made the offer at a rally in Mumbai on Thursday, while condemning Pragya Thakur over remarks made against 26/11 hero Hemant Karkare. 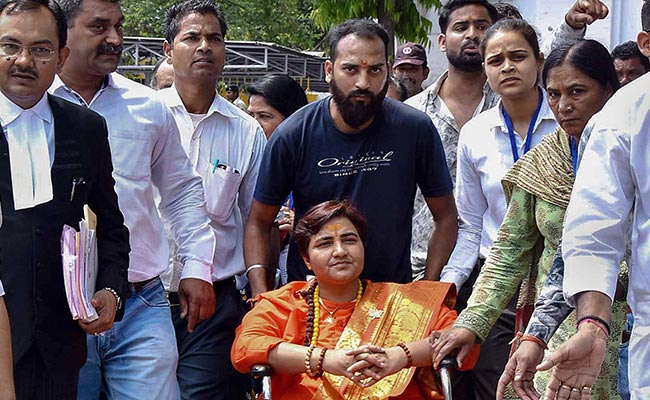 Pragya Thakur is pitted against the Congress' Digvijaya Singh in Bhopal.

Ashok Kamble said this at a rally in Mumbai on Thursday, while condemning Pragya Thakur - the BJP candidate from Bhopal - over remarks made against 26/11 hero Hemant Karkare. The announcement, however, caught the attention of the authorities.

Pragya Thakur, an accused in the 2008 Malegaon blasts case, had claimed at an April 19 rally that Hemant Karkare was killed by Pakistani terrorists during the Mumbai attacks because of a curse she placed on him. "I called Hemant Karkare and asked him to let me go if there is no evidence (against me). He (Karkare) said that he will bring evidence but will not leave me. That was when I told him - you will be ruined," she said.

The comment spurred condemnation cutting across party lines, forcing Pragya Thakur to apologise. However, she dove headlong into another controversy just a few days later by boasting about her role in demolishing the 16th-century Babri Masjid on December 6, 1992.

This time, the 49-year-old politician got a show-cause notice from the Election Commission.

Pragya Thakur has been pitted against Congress veteran Digvijaya Singh in Bhopal, which will go to the polls on May 12. However, the father of a Malegaon blasts victim has filed a court plea against allowing her to contest.