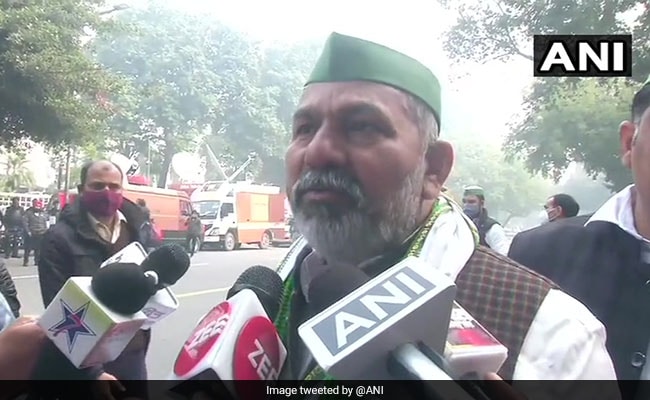 Rakesh Tikait had said farmers will take out a procession from Red Fort to India Gate on Republic Day.

Ahead of the ninth round of talks between the government officials and the farmers at Vigyan Bhavan on Friday, the national spokesperson of Bhartiya Kisan Union (BKU) Rakesh Tikait on Friday said the farmers would withdraw the Republic Day tractor parade if the Supreme Court orders.

"We would conduct the rally on some different day," he further added.

Mr Tikait had earlier said the farmers will take out a procession from Red Fort to India Gate and hoist the national flag at Amar Jawan Jyoti on Republic Day.

"The bill was passed by the Parliament so only government should repeal it, not the committee made on the orders of the Supreme Court," BKU spokesperson said.

"The government needs to devise a plan to scrap the three laws and give legal guarantee for MSP," Mr Tikait said adding that it is better to hold talks with the government than with the committee formed on the order of the Supreme Court.

Farmers have been protesting at different borders of the national capital since November 26 against the three newly enacted farm laws-- Farmers' Produce Trade and Commerce (Promotion and Facilitation) Act, 2020, the Farmers (Empowerment and Protection) Agreement on Price Assurance and Farm Services Act, 2020, and the Essential Commodities (Amendment) Act, 2020.

The ninth round of talks between the Indian government and the farmers'' delegation is underway.

Election Officials Are Frontline Workers, Will Be Vaccinated: Poll Body