Some users on Twitter have claimed that two girls clashed over a boy and it all escalated when their friends joined them. 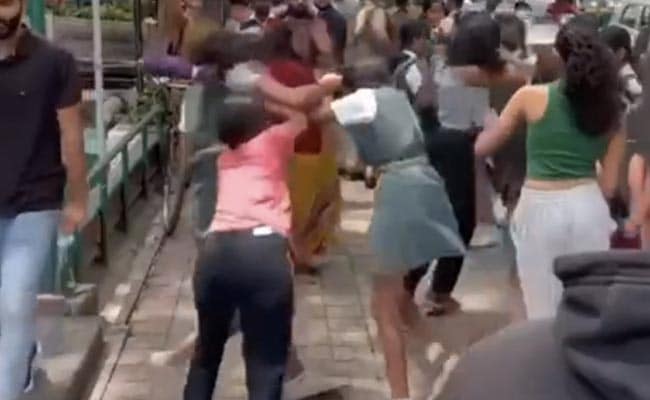 Schoolgirls in Bengaluru fighting with each other.

A video of school girls fighting with each other on the road in Bengaluru has gone viral on social media. The video shows two groups of girls fighting near Vittal Mallya Road on Tuesday.

A baseball bat is seen passing hands as girls pull each other's hair. The video also shows one of the girls being dragged down the stairs and her head smashed against a wall.

While one group of girls is dressed in school uniform, others are wearing casual clothes.

The girls are also seen kicking, punching and pushing each other as some students escape from the area.

The video of the fight garnered thousands of views online. Eventually, some locals intervened to separate the fighting groups of girls.

As the video ends, one of the girls is seen walking away with a bloody nose with the support of two of her friends.

There is no comment from the police and no case has been registered so far, but rumours have been swirling on social media about the reason for the fight.

Some users on Twitter have claimed that two girls clashed over a boy and it all escalated when their friends joined them. People have also shared what they claim is a photo of the boy at the centre of the fight and screenshots of a conversation, which reportedly took place between the students of the school.

The two girls who started the fight are from two different but prominent schools of Bengaluru.

While some Twitter users mocked the girls for fighting over such a petty issue, others expressed concern.

“Imagine a person who missed school on that day,” a user tweeted.

“I honestly hope everyone who involved in this fight are genuinely ok,” another user posted.

Some locals even informed the police control room (PCR) about the fight.