Bengal Election 2021: Cheered by massive crowds, Amit Shah stood atop a decorated vehicle with BJP candidate for the Singur seat Rabindranath Bhattacharya, who recently joined the BJP after leaving the Trinamool, and smilingly waved at people standing by the roadside and on terraces and balconies. 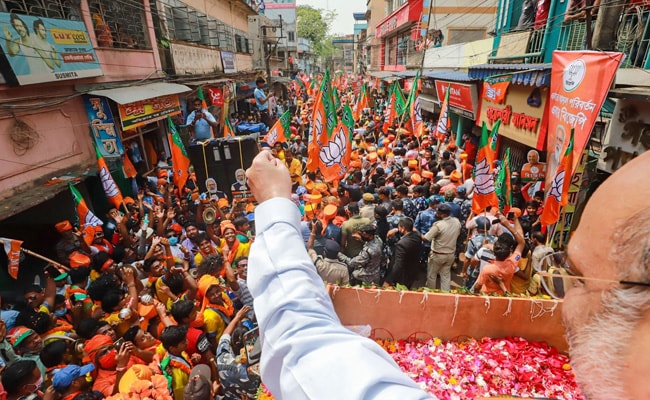 Union Home Minister Amit Shah held a massive roadshow today in West Bengal's Singur, once a hot spot of the anti-land acquisition movement. He assured rapid industrialisation of the region if BJP is voted to power in the ongoing elections.

The symbolism of the Home Minister holding a roadshow in Singur, three days after Prime Minister Narendra Modi held a rally there and alleged the "obstructionist mindset" of Chief Minister Mamata Banerjee deprived West Bengal of industries and jobs, was clear - the BJP wants to corner her over the state's dwindling industrial base and alleged job loss.

Cheered by massive crowds, Amit Shah stood atop a decorated vehicle with BJP candidate for the Singur seat Rabindranath Bhattacharya, who recently joined the BJP after leaving the Trinamool, and smilingly waved at people standing by the roadside and on terraces and balconies.

Speaking to reporters during the show, Amit Shah said Singur, which has been shunned by industry since the 2006 agitation, will be developed by the next BJP government in the state.

"We will develop the region by setting up industries and a Rs 500 crore intervention fund has been announced for potatoes, for which the area is known, in our Sankalp Patra (manifesto)," he said.

Amit Shah said, after winning the elections, the BJP government will ensure that small, medium and large industries are set up in Singur, situated beside the national highway connecting Kolkata and New Delhi.

"We will pursue politics of development, dialogue and cooperation, instead of confrontation," he said.

He said he welcomed Trinamool chief Mamata Banerjee for invoking Hindu gods and goddesses, and for reciting the Chandi Path (hymns to Goddess Durga) at public meetings, but quipped that it was "too late for her".

"The BJP will win Bengal elections with more than 200 seats," he said. West Bengal has 294 assembly seats.

Mamata Banerjee, often accused by Prime Minister Narendra Modi and other BJP leaders of minority appeasement, has been regularly chanting hymns and asserting her Hindu identity to appeal to the majority community.

The road show meandered through the roads of Singur town for nearly an hour from Dulepara more to Singur police station, as colourful posters, BJP flags and green and saffron balloons dotted route.

Chants of 'Jai Shri Ram' and slogans demanding industrialisation and jobs pervaded the air as the procession crawled through streets.

Donning a saffron coloured turban, the 88-year-old Bhattacharya, a four-time Trinamool MLA from Singur before he left the party on being denied a ticket, waved at the crowd standing alongside Amit Shah.

Rabindranath Bhattacharya's induction and nomination had caused a lot of resentment among BJP old timers in Singur.

Amit Shah is scheduled to hold three more road shows in the state, including one in Kolkata today.

Referring to the Singur movement of 2006-08 that forced Tata Motors to move out its proposed small car Nano's mother production unit from there, PM Modi had told an election meeting that the Trinamool used the place for political purpose and then left the people to fend for themselves.

Singur, a small town in Hooghly district, has an old connection between Mamata Banerjee and Narendra Modi.

The scene of an aggressive movement led by Mamata Banerjee against forcible land acquisition by the then Left Front government for the 'Nano' project, Singur, along with Nandigram, had catapulted the street fighter Trinamool leader to power in West Bengal in 2011.

The sustained, and often violent, protests by the local farming community led by Mamata Banerjee forced the Tatas to move out of Singur.

A cryptic 'Suswagatam' SMS from Narendra Modi, then the Chief Minister of Gujarat, to Ratan Tata, the group chairman, is said to have clinched the deal in Gujarat's favour and led to the relocation of the project to Sanand near Ahmedabad.

Many considered it as West Bengal's loss and Gujarat's gain.