Saumitra Khan claimed leaders of just one or two districts are running the entire organisation in the state. 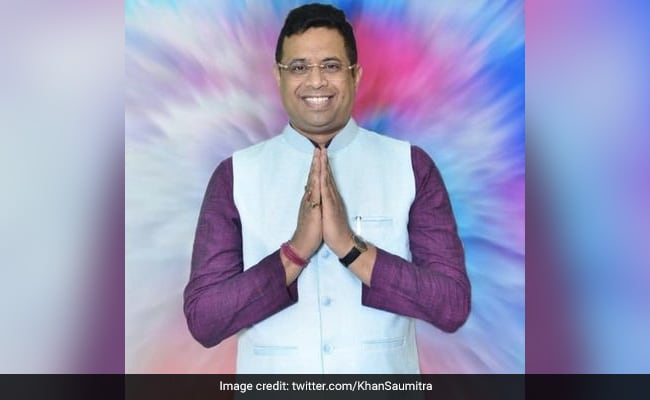 Hours after resigning as BJP's Bengal youth wing chief and taking to Facebook to launch a blistering attack on the state party leadership, MP Saumitra Khan on Wednesday decided to withdraw his resignation after senior party leaders including Union Home Minister Amit Shah intervened and assured to look into his grievances.

Earlier in the evening, the growing discord in the BJP's Bengal unit came to the fore as Mr Khan stepped down from the BJYM post and attacked Leader of Opposition Suvendu Adhikari, claiming that he tries to take credit for all the achievements.

At around 9 PM, he again took to Facebook to inform that he had decided to withdraw his resignation. "I take an opportunity to inform that under instruction of our BJP leaders BL Santhosh Ji,Amit Shah Ji and Tejasvi Surya Ji, I withdraw my resignation as a mark of respect," he said in an another Facebook post.

According to the state BJP sources, central BJP leaders has assured him that his grievances would be looked into and urged him to take back resignation.

Mr Khan did not cite any reason for quitting but his announcement on the social media platform coincided with induction of four BJP MPs from Bengal in the union ministry.

The Bishnupur MP, however, had asserted that he wouldn't leave the BJP.

"From today, due to personal reasons, I am relieving myself of the responsibility of Bharatiya Janata Yuva Morcha (BJYM) state unit. I was in BJP, I am in BJP, and will continue to be a part of it," Mr Khan, who had crossed over to the saffron camp in 2018 from the TMC, said on Facebook.

Iterating that he has full faith in Prime Minister Narendra Modi and the central leadership, he, however, trained his guns on Mr Adhikari and said "one particular leader was making frequent trips to Delhi and claiming credit for the every success of the party".

"This leader of opposition in the state should look in the mirror. He is misleading the leaders in New Delhi. He considers himself as the tallest leader of the party in Bengal," Mr Khan said in a video that he posted on the networking site.

He claimed leaders of just one or two districts are running the entire organisation in the state.

In a dig at state BJP president Dilip Ghosh, the disgruntled leader further said, "He understands only half of what happens. He cannot comprehend all of it."

Sharing responsibility for the party's defeat in the assembly polls, Mr  Khan said, "It is time for me to step down. I have never hankered for any post."

Alleging that "many politicians with dubious credentials had been inducted into the BJP before the assembly polls", Mr Khan said, "Some of them were nominated and they failed to win elections."

He further said that "it appears only some people made sacrifices for the party and the rest had no contribution".

Mr Adhikari, on his part, refused to respond to Mr Khan's allegations.

"I will not comment. I will not take it seriously. He is my younger brother. I will go and have lunch at his residence in Delhi. I had campaigned for Saumitra Khan in Kotulpur in 2011. I wish him every success in his career," he maintained.

The leader of opposition also said that he doesn't attach much importance to Facebook videos.

Asked if any disciplinary action would be taken against Mr Khan, he said, "I shouldn't talk on organisational matters. It will be decided by state president Dilip Ghosh."

Reacting to Mr Khan's comments, TMC state general secretary Kunal Ghosh said the rivalry between the old and the new leaders of the saffron camp is now out in the open.

"Suvendu had enjoyed power in TMC before joining the BJP. Now he is cornering other leaders in the saffron party. Old and loyal members are bound to get upset," Mr Ghosh said.

Mr Khan's estranged wife and TMC leader Sujata Mondal said she had warned the MP against joining the BJP long ago.

"He should understand that a party like the BJP will back elements like Adhikari. I had realised this long back," she added.