Bedridden For Over 2 Years, This Teen Can Pursue Her Doctor Dream Again

"I am unable to express how difficult this phase was for me," says Zinatu Umar, recounting the ordeal she underwent after accident in September 2016. 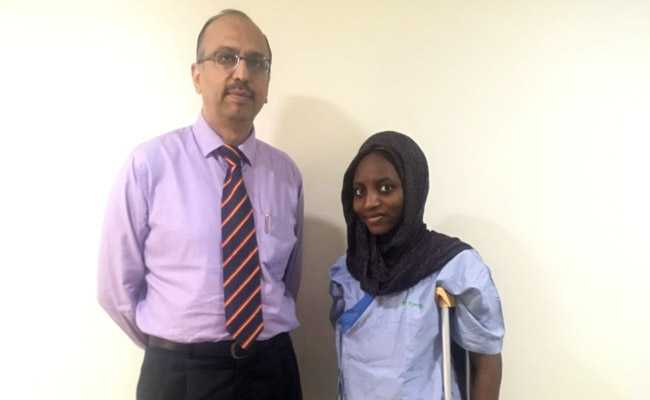 Zinatu Umar is excited about leading a normal life all over again.

A Nigerian teen, who was left bedridden over two years ago after a near-fatal crash, is all set to give a fresh impetus to her dream of becoming a doctor.

19-year-old Zinatu Umar can soon walk again "normally", her doctor says, after she underwent a surgery in Mumbai.

"I am unable to express how difficult this phase was for me," says Zinatu, recounting the ordeal she underwent after her accident in September 2016.

She was with her school friends when the vehicle they were in met with an accident. Zinatu was rushed to a local hospital in Nigeria where the doctors revealed she had suffered injuries in her hips, legs and feet.

At that time, she was discharged after her femur was plated (bone extended from hip to the knee) and a grip was put in place for the hip to function. But she had to undergo another surgery in February 2017 and local doctors recommended a corrective procedure for her hip deformity. However, her condition worsened.

Her hip sticking out of the socket due to damage to the ball and socket had left her bed-ridden.

Doctors in Nigeria were doubtful if her condition would improve but her father, a civil servant, did not lose hope and brought her to Mumbai after some internet research.

"Zinatu Umar was being looked after by her father and sister constantly, who were very optimistic about her recovery," says Dr Kaushal Malhan, Senior Knee And Hip Surgeon at Fortis Hospital, Mulud, Mumbai, who recommended Total Hip Replacement (THR) and reconstruction surgery for her. Total hip replacement and reconstructive surgery is a procedure where the damaged ball and socket of the hip joint are completely removed and are replaced with locally available bones.

"After operation, she is now able to walk by putting half her weight on the knees by using crutches; has been put on medications and will soon return home, start going to school and continue with her further studies," Dr Malhan said. The 2.5 hour-long surgery was successful with an implantation of the new ball and socket to the affected hip.

Promoted
Listen to the latest songs, only on JioSaavn.com
Zinatu, who is excited about leading a normal life all over again, says, "The pain has now disappeared and I look forward to walking normally like before. I will soon go back to school and pursue my dream of becoming a doctor."