"We were forced into this conflict because of a humanitarian crisis of gigantic proportion, resulting in the annihilation of Pakistan Army and the birth of Bangladesh," Gen Naravane said 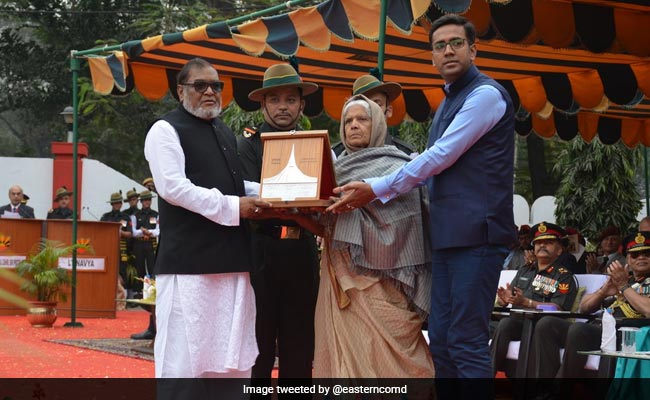 Martyrs of 1971 war honoured at an event in Kolkata.

The Bangladesh government, on the occasion of 'Vijay Diwas', on Sunday posthumously honoured 12 Indian Armed Forces personnel for sacrificing their lives during the 1971 Indo-Pak War.

Describing the honouring of the families of the martyred personnel as a great initiative by the Bangladesh government, GOC-in-C Eastern Command of the Army Lt Gen M M Naravane said the process of honouring martyred soldiers will continue in the years to come and it will strengthen the bond between the two countries.

"We were forced into this conflict because of a humanitarian crisis of gigantic proportion, resulting in the annihilation of Pakistan Army and the birth of Bangladesh," Gen Naravane said.

We were forced into this conflict because of a humanitarian crisis, Lt Gen M M Naravane

"Very rarely it has happened that when two countries fight, a third country is born," he said. The Bangladesh government has decided to honour over 1,600 Indian Armed Forces personnel who laid down their lives in the eastern theatre during the 1971 Indo-Pak War.

Vijay Diwas (victory day) is celebrated every year on this day to mark India's decisive win over Pakistan and the birth of Bangladesh.

Prior to this, a wreath laying ceremony was held at Vijay Smarak to pay respects to the martyred soldiers. Honouring soldiers who were martyred in the war in the eastern theatre commenced in 2017 with the Bangladesh prime minister giving away the plaques to families of seven soldiers, he said.

The Bangladesh delegation included 30 'Muktijoddhas', who took part in the liberation war, and six serving officers of Bangladesh's Armed Forces.

Describing December 16 as the most glorious day in the life of every Bengali, Haque said the fruits of freedom were achieved after suffering a nine-month long genocide by the Pakistani forces, wherein 30 lakh people lost their lives and two lakh women were raped.

"The Indian soldiers fought for our cause and laid down their lives," he said.

Following the wreath laying ceremony, four Hawk trainer aircraft of the IAF performed a fly past over the Vijay Smarak in a 'Missing Man' formation, which is an aircraft manoeuvre used to honour the dead or missing.

This was followed by three helicopters from the Army Aviation Corps, which flew at tree-top level, with one showering rose petals over the assembly.