Bhuj: The Pride Of India Trailer - The film, based on the 1971 Indo-Pak War, is packed with patriotism and action 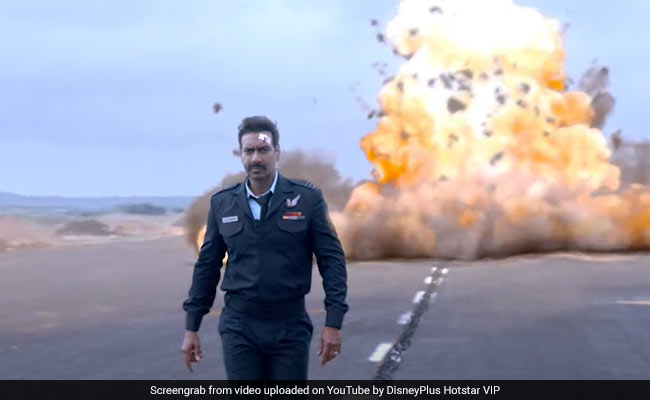 Bhuj: The Pride Of India Trailer - A still from the film. (Image courtesy: YouTube)

The much-awaited trailer of Ajay Devgn's Bhuj: The Pride Of India has arrived and it is packed with patriotism and action. The film, directed by Abhishek Dudhaiya, is based on the 1971 Indo-Pak War and Ajay Devgn plays the role of Squadron Leader Vijay Kumar Karnik, who was in-charge of the Bhuj airbase during the war. The film also stars Sanjay Dutt as Army Scout Ranchordas Pagi, Sonakshi Sinha as social worker Sunderben Jetha Madharparya, Ammy Virk as Flight Officer Vikram Singh Baj Jethaaz and Nora Fatehi as Indian spy Heena Rehman. The trailer of Bhuj: The Pride Of India will definitely give you goosebumps and stir up the feeling of patriotism in you.

The 3-minute-20-seconds long video shows how Squadron Leader Vijay Kumar Karnik and his team fought the Pakistani military when they "raided the Bhuj airfield 35 times in 14 days" by re-constructing an entire IAF airbase with the help of over 250 women from a local village. With his smart techniques and planning, Squadron Leader Vijay Kumar Karnik along with his team fearlessly defeated Pakistani armed forces.

Watch the trailer of Bhuj: The Pride Of India here:

A couple of days ago, Ajay Devgn unveiled the motion poster of the film. Check it out here:

Bhuj: The Pride Of India will premiere on August 13 on Disney+Hotstar.