Exclusive: What Unreleased Satellite Images Of The Balakot Strikes Show

Balakot air strike: The image accessed by NDTV is of the Markaz, the hostel for terrorists. The image is far clearer than any others published since the Balakot attack took place on February 26.

One of the images of the Indian Air Force (IAF)'s strike on the Jaish-e-Mohammed terror training camp in Pakistan's Balakot, seen by NDTV, is a monochrome high resolution photo.

This is an image of a hostel for Jaish terrorists that the IAF was tasked to attack.

The image is far clearer than any others published since the Balakot attack took place on February 26.

The image shows a house with sloping roofs -- nothing out of the ordinary in hilly areas.

There are, however, three clear marks on one of the sloping roofs. These can be described as "holes". Each hole has a diameter of 1 metre, a detail clearly mentioned on the printout of the satellite image.

These details are now a part of a dossier with the government which, according to the Hindustan Times, spells out the impact of the Balakot attack.

''Among the targets destroyed were a guest house where Maulana Masood Azhar, his brothers Adul Rauf Azhar and senior functionaries of the banned terror group Jaish-e-Mohammed (JeM) usually stayed while visiting the camp and a Markaz or hostel for JeM's trainee terrorists, according to the report,'' says the Hindustan Times.

The image accessed by NDTV is of the Markaz, the hostel for terrorists. 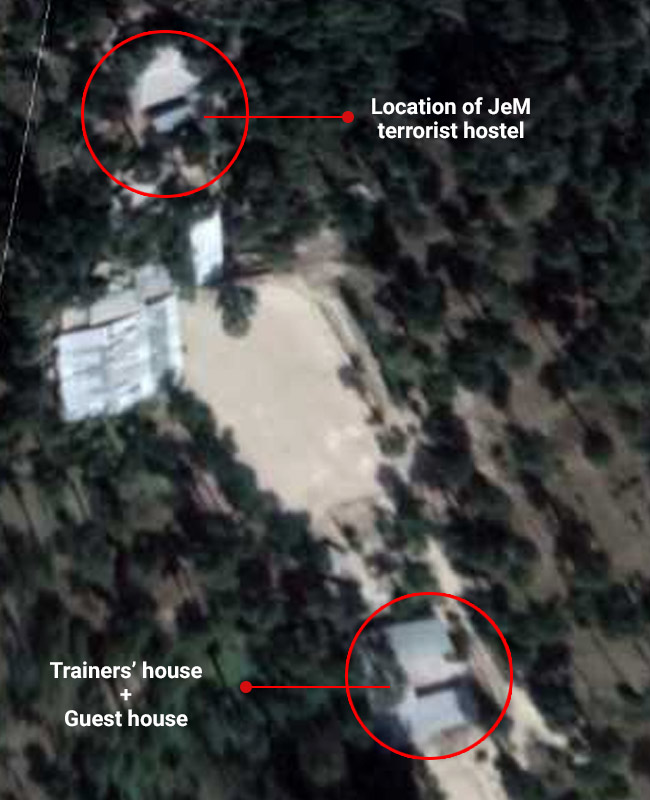 The hostel, located immediately to the north of a large field at the Jaish facility, had a breadth of approximately 40 feet, a detail which can be corroborated on images on Google Earth Pro (shown above). Along its sides, it appears to be approximately 35-feet long. 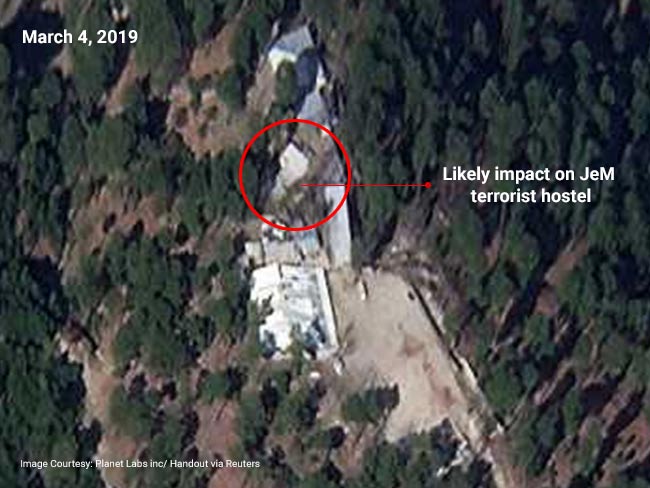 A part of this hostel appears to have been struck in the post-strike satellite image of March 4 (six days the IAF attack) which has been released by Reuters and shown above. In its place, a patch of dark soil can clearly be seen in the satellite image handed out by Reuters.

Both these buildings lie to the south of the field mentioned above and are under the cover of trees and not clearly visible in either pre-strike or post-strike images released commercially.  The Air Force, however, says they have satellite images that clearly indicate that these buildings have been struck as well.

Earlier reports by satellite imagery experts suggested that the bomb entry points were visible in the largest structure at the Balakot camp, a structure described as a "hall".  It is now unclear if this hall was hit by other weaponry or the damage shown is the result of the explosion of 3 Spice 2000 bombs just metres away.

The weapon used in all cases was an Israeli-designed smart munition called the Spice 2000, a long-range glide bomb which uses satellite guidance to home in on its targets.

Designed to prevent collateral damage, the weapon strikes within 3 metres of its designated impact point.

The IAF used a penetrator variant of the Spice 2000 which pierces roofs and floors and explodes at a pre-designated depth.

According to a senior officer, three weapons were dropped on one target (the hostel) within 1.5 to 3 metres of the point they were supposed to hit. The other two weapons hit their targets precisely - with no error whatsoever.  Six weapons in all were carried by the Indian Air Force Mirage 2000 fighters involved in the attack mission.

Five bombs were dropped and all five hit their designated targets.

Getting this satellite imagery has been problematic for the Indian Air Force. NDTV has learnt that the best images that have been acquired come from a friendly partner nation. A satellite pass of the Balakot target in the hours following the IAF attack on the morning of February 26 did not reveal the detail the government was looking for because of the presence of clouds.

It is unclear if the government will ever release images of the attack. International media and security experts have questioned the success of the IAF's attack on the Jaish training facility. They say commercially available footage does not appear to show significant damage and that none of the structures appear to have been brought down. Jeffrey Lewis, the Director of the East Asia Nonproliferation Project at the Middlebury Institute of International Studies says, "The high-resolution images don't show any evidence of bomb damage."

The Indian Air Force counters this vociferously. Senior officers NDTV has spoken to describe the manner in which the Spice 2000 works and say the weapon does not necessarily bring down all buildings that it strikes. ''It kills all soft skin targets by the blast over pressure wave within a confined room.  An advanced fuse, available as an option, can also count floors.'' In the case of Balakot, at least one of the Spice 2000 smart bombs was set to pierce a two-storey building before exploding.

It is still not clear if the government will release satellite images of the Balakot attack or intends to provide further proof on the number of terrorists who have been eliminated.  What seems to be clear, though, is that the images do not show a `big bang.' There is, however, clear evidence of precision strikes on selected targets within the terror base in Balakot.