Badaun Sisters' Rape: 'They Could Have Been Saved if Police Acted', says Family 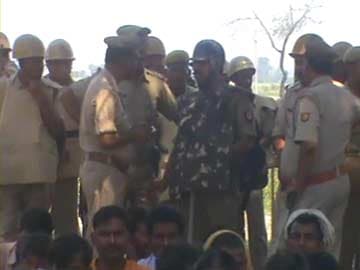 Policemen stand guard as villagers in Karta, Badaun stage a protest against the gang-rape of two sisters who were later hanged from a tree.

Badaun, UP: Amid growing outrage over the gang-rape of two teen sisters in Uttar Pradesh's Badaun district, the two policemen who allegedly did not act soon enough on the complaint of the girls' family have been arrested.

They were earlier in the day dismissed by the Akhilesh Yadav-led government. Their dismissal had come a day after the Ministry of Home Affairs asked the UP government for a report on the incident.

The teenagers, cousins aged 14 and 15, were found hanging from a tree in Katra village of western UP on Wednesday morning. The father of one of them says they could have been saved had the police acted on time.  (Badaun Shocker: Is Safety a Distant Dream for India's Daughters?)

He alleges that when the girls went missing from their home on Tuesday night, after they stepped out to relieve themselves, their brother went looking for them and returned to tell him that they had been abducted by some men from the village. (Foreign Media on the Rape and Murder of Teenagers in UP)

When the family went to the accused's house to confront them, the father told NDTV, they admitted to abducting the girls and said they were in their custody but refused to release them. A policeman, who has now been dismissed, was also present there with the accused at the time, the girl's father has said.

The family alleges that when they approached the local police for help, they refused to register a first information report for hours. While they were unsuccessfully trying to convince them came the news that the girls were found hanging from a tree in an orchard in their village.

A case of rape and murder was reportedly registered against three men only after angry villagers protested against the alleged police apathy. Two cops were later booked for negligence of duty and suspended.

Three accused have been arrested so far. Four others are still at large.  The family has demanded an independent enquiry into the case alleging that they have little hope of justice from the Akhilesh Yadav government since the accused belong to the same community as the chief minister.

Promoted
Listen to the latest songs, only on JioSaavn.com
Mr Yadav had assured yesterday that "whoever is found guilty in the case will be punished." Accusing him of failing to maintain law and order in the state, his rival and former Chief Minister Mayawati said today that he should resign.