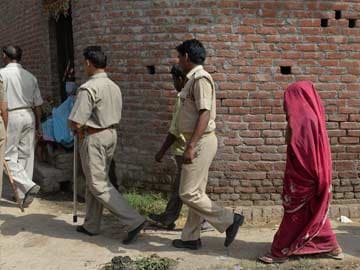 Badaun: The family of one of the girls gang-raped and killed in Uttar Pradesh's Badaun last week, has vehemently denied the claim made by Uttar Pradesh's seniormost police officer who suggested property dispute could be one of the motives behind the crime.

The family has reiterated that they have no faith in the state police and claimed they were not safe in the village. They have also refused to cooperate with the Special Investigation Team (SIT), constituted by the state government to probe the case.

The father of the girl has also demanded a CBI inquiry.

Two girls, aged 14 and 15, were found hanging from a mango tree in an orchard in the Katra Sadatganj village in Badaun on May 28. A post-mortem and preliminary medical examination suggested that they were raped and died from hanging. Five persons, including two policemen, have been arrested so far in connection with the case.

But the state's Director General of Police (DGP) said on Saturday that there might be a possibility that those "who are being talked about, may not be involved", adding that property could have been a possible motive behind the gruesome crime.

"One of the girls was her father's only daughter. They are three brothers who have limited resources. In case she is not alive, it could benefit others. It (property) could be one of the motives. I am not saying that this is the motive," said AL Banerji, Director general of Police, Uttar Pradesh.

The victims' families had alleged that four men from the village had abducted the girls when they stepped out on the night of May 27 to relieve themselves. They alleged that the accused gang-raped the cousins before killing them and hanging them from a tree. Three of the accused belong to the same community as the state's chief minister, Akhilesh Yadav. So are the two cops, who the families allege did not act on their complaint after the girls went missing.

Promoted
Listen to the latest songs, only on JioSaavn.com
The state government, which has come under intense criticism for its callous response to the horrific crime, on Saturday suspended the District Magistrate and the Senior Superintendent of Police in Badaun.