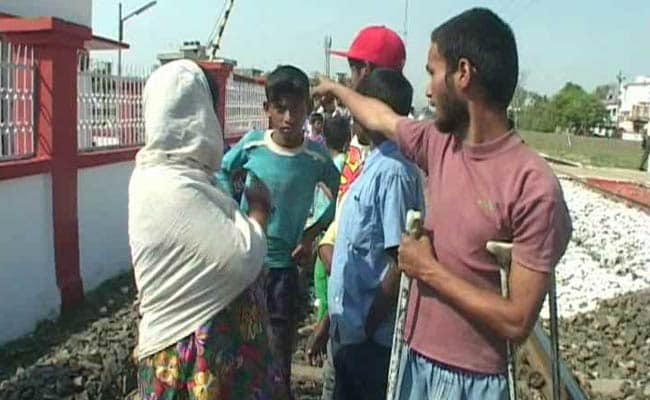 People gather at the train track on which the 4-month-old girl was found.

A four-month-old girl bundled in plastic and flung out of a moving train by a woman near Ranchi in Jharkhand survived miraculously with only minor injuries, the police said on Tuesday. The woman, assumed to be the baby's mother, is yet to be found.

"The child survived as she was put in a container and fell in the bushes," said Hazara Begum, a tea shop owner who lives next to the railways tracks near Agora station. She took the baby girl to a hospital where an x-ray showed a fractured hand.

Ms. Begum wanted to adopt the child but the Jharkhand Police handed her over to Child Line, a local non-governmental organization, which then sent the baby to a shelter.

This incident that occurred a day after International Women's Day has again brought into focus rampant discrimination against the girl child in Jharkhand and across the country. According to the 2011 census Jharkhand's child sex ratio is 948 girls per 1000 boys, down from 2001 when the same figure was 965.

Promoted
Listen to the latest songs, only on JioSaavn.com
"It is very shocking that the same woman who had this child in her womb for nine months threw her away like this," said Jahan Ara, President, Child Welfare Committee, Ranchi. "A total change in societal values needs to take place," she added.