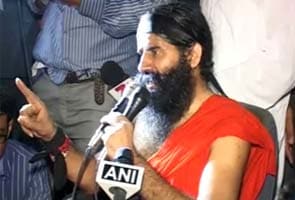 New Delhi: At a stadium in central Delhi near Ferozeshah Kotla, Baba Ramdev and thousands of his supporters are refusing to return home. They were arrested and taken there earlier today while protesting against black money and corruption. The police now has to figure out how to evict them without provoking any violence.

At 5 pm, the guru was brought, riding atop a bus, into the Ambedkar Stadium. Police sources say they had not anticipated the scale of the protests. There were huge traffic jams, the result of sudden showers and thousands of his followers, streaming into the makeshift jail where Baba Ramdev was to be detained. By 7:30 pm, there were 8,000 people at the stadium; worried about crowd control, the police said all detainees were free to leave. "We have won 100 per cent," Baba Ramdev said to his audience. "The victory of a movement lies in its people," he said. The crowd roared.

The drama today belied the lacklustre mood that had set in at Ramlila Maidan, where the camp opened with a strong showing last week; but over the weekend, the enthusiasm had dissipated. Till 2 pm, when Baba Ramdev left his base camp at Ramlila Maidan on top of a bus, the plan was to lead a protest march towards Parliament - the police had made it clear that the demonstration would be stopped. The bus moved slowly, allowing his supporters who were on foot to keep pace. At Ranjit Flyover, just half a kilometre away from his departure point, a policeman climbed on top of the bus and placed his hand on the guru's arm - and with that controlled gesture, he was arrested. 60 buses moved thousands of followers towards a stadium on the outskirts of Delhi. But the rain and the thousands of people who surrounded his bus forced the police to alter its plans and switch to the more centrally-located Ambedkar Stadium.

Perched on his bus, wearing a black band on his forehead and his arm, Baba Ramdev reiterated his mission - to have the Congress voted out of power, because it has shown no real inclination to combat corruption or to repatriate thousands of crores of illegal and untaxed money deposited by Indians in foreign bank accounts. "There is a Gangotri (fount) of corruption flowing through that one party," he said on top of his bus to NDTV. "We will make sure they lose."

It took the police five hours to move Baba Ramdev through the 3-4 kilometres from the flyover where he was arrested, to Ambedkar Stadium.

Politicians came out in support of him today, isolating the Congress, which has refused to negotiate or talk with Baba Ramdev. At his camp in the morning, BJP president Nitin Gadkari and Sharad Yadav, who heads the JD(U), provided a VIP touch. Their appearance was partially provoked by his willingness to openly target the Congress. When he began his camp, he said he would not single out a political party or personality. Today, he made strong statements about how the Congress must be defeated; opposition parties were quick to grab the ring.

"You are not alone, guruji," said Mr Gadkari. "All members of the NDA are with you," he added, referring to the coalition of political parties led by his BJP.

In faraway Patna, Chief Minister Nitish Kumar lent his considerable credibility to the Baba's cause. "The issues raised by him are genuine and affect the common man," Mr Kumar said. "As long as the protest is non-violent, we will support it," he said.

Mr Kumar runs his government in Bihar in partnership with the BJP. Baba Ramdev's war cry - he asked the public to vote out the Congress for its alleged ambivalence towards corruption - provided opposition parties to hitch their wagon to the buses in which his supporters were led away as they courted arrest at a flyover en route to Parliament.

Mulayam Singh Yadav and Mayawati, leaders of the two major parties in Uttar Pradesh, both said the issue of black money is worth attention and scrutiny. Both leaders have been investigated formally for corruption. "Our party is against black money. Whoever talks about bringing back black money, we will support (him)," Mr Yadav, who is the chief of the Samajwadi Party, told reporters outside Parliament House. Mayawati, who was voted out as chief minister earlier this year, said, "It is the Centre's responsibility to take along all parties and try to find a way to bring back black money and if this money comes back to India, people living below  the poverty line will be able to lead a decent life."

Promoted
Listen to the latest songs, only on JioSaavn.com
Rajiv Shukla retaliated on behalf of the government. The Minister of State for Parliamentary Affairs said, "During UPA II, we have recovered Rs 48,000 crore through the tax notices sent to people. I want to ask if during NDA regime they were able to recover even Rs 48."