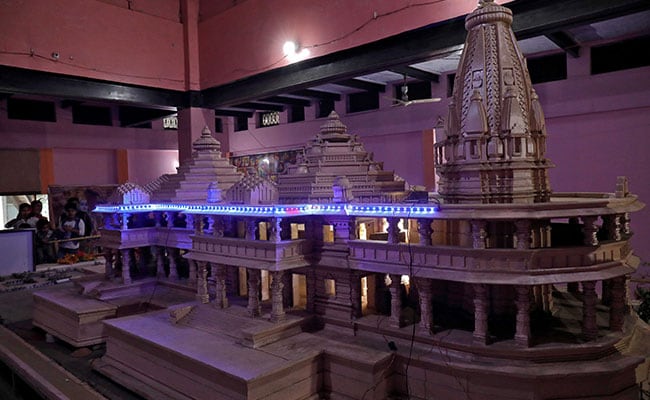 A model of the Ram temple that Hindu groups want to build in Ayodhya.

Refusing to overrule a chunky fine imposed by the Allahabad High Court, the Supreme Court on Friday served lacerating rebuke to a petitioner who had sought its permission to conduct a puja in Ayodhya, where a dispute over a Ram temple and mosque has raged for decades.

"You will not let this country live in peace... Somebody has to always poke," Chief Justice Ranjan Gogoi told the petitioner Amarnath Misra, a former national general secretary of the Ram Janmabhoomi Mandir Nirman Nyas which wants a Ram Temple constructed in Ayodhya.

The Supreme Court refused to overrule the Allahabad High Court which had rejected a similar request to conduct a ceremonial prayer at the "undisputed part of the 67.7 acres land" in Ayodhya and imposed a penalty of Rs 5 lakh.

The Ayodhya dispute was referred to a three-member panel of mediators to speak to all stakeholders for a solution by the Supreme Court last month. The eight-week deadline for the talks ends on May 3.

"Mediation will take place. We don't see any legal obstruction to it," Justice Gogoi had said while delivering the order on India's most politically sensitive dispute squarely in the middle of election season.

Hindu groups believed the mosque was built on the ruins of a temple that marked the birthplace of Lord Ram. The mosque was razed by Hindu activists in December 1992. In the days that followed, 2,000 people died in riots across the country.

In 2010, the Allahabad High Court allotted two-thirds of the land to Hindus and said they could keep a makeshift temple over the razed mosque's central dome.

The Sunni Waqf Board was given a third of the land. Both Hindus and Muslims approached the top court, filing 14 petitions that challenged the High Court order.