The MVA government comprising of Shiv Sena, NCP and Congress completed a year last month. All through this period, various BJP leaders have been saying that the government will collapse, citing ideological differences among the alliance partners. 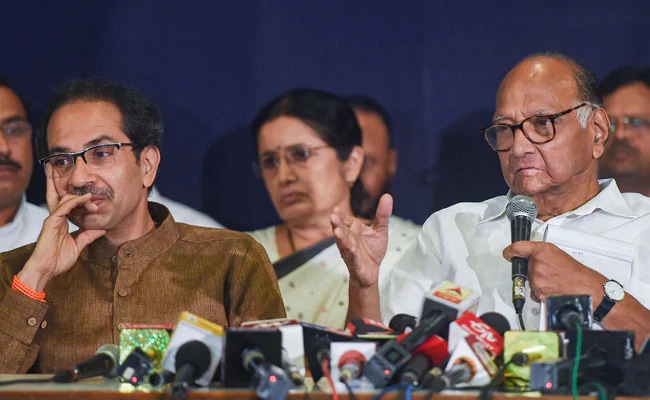 Confident that any alleged attempt by BJP to bring down the Maharashtra government won't succeed, NCP chief Sharad Pawar has asserted that the Uddhav Thackeray-led Maha Vikas Aghadi dispensation is stable and it will continue to rule the state.

He also slammed the Enforcement Directorate (ED) action against leaders of the ruling alliance and their family members as "misuse of authority".

"It has been a year now (since the Thackeray-led MVA government assumed office)... they (BJP) were to bring down the government in two months, then they were to do so in six months, then in eight months. But, nothing will happen," Mr Pawar told news agency PTI in an interview.

"It is a stable government and it will continue," he said.

The MVA government comprising of Shiv Sena, NCP and Congress completed a year last month. All through this period, various BJP leaders have been saying that the government will collapse, citing ideological differences among the alliance partners.

BJP and Shiv Sena had contested the 2019 assembly polls together, but their alliance fell through over the issue of chief ministership.

It was Sharad Pawar who is said to have then rallied Shiv Sena, NCP and Congress together to form the MVA government.

The Maratha stalwart, who has been Maharashtra's Chief Minister four times and has also been union minister at the Centre in the past, is seen as the guiding force behind the functioning of the Uddhav Thackeray-led government in the state.

When asked about the ED's notice to Shiv Sena leader and Saamana Editor Sanjay Raut's wife Varsha, Sharad Pawar said, "This is a misuse of authority."

The ED had summoned Varsha Raut for questioning in the over Rs 4,300-crore PMC Bank money-laundering case. She is now expected to appear before the central probe agency on January 5 after skipping the summons thrice.

Sharad Pawar said, "They even tried to give me a notice once but later withdrew. I was not even a member of the bank and I didn't have any account in that bank."

Last year, the ED registered a criminal case in the multi-crore Maharashtra Sahakari Cooperative Bank (MSCB) and the role of Sharad Pawar, his nephew Ajit Pawar and others had come under the scanner of the agency.

The ED did not eventually summon Sharad Pawar, but the NCP president had at that time insisted that he would visit the probe agency's office. He dropped the plan later after the state police requested him not to go ahead to avoid possible law and order situation.

Shiv Sena has also been alleging that the central probe agencies were targeting its leaders unfairly.

Former BJP leader Eknath Khadse, who has recently joined Sharad Pawar's NCP, was also summoned by the ED for questioning in connection with a money-laundering case linked to a land deal in Pune.

Last month, the ED had raided premises linked to Shiv Sena MLA Pratap Sarnaik in connection with a money-laundering case.