A case of attempt to murder has been filed against 22 Congress workers in flood-hit Madhya Pradesh's Chhindwara district after Sub Divisional Magistrate CP Patel's face was blackened during a protest. 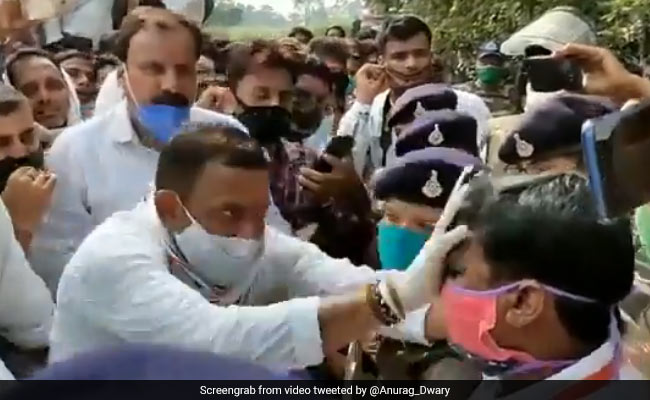 Twenty-two Congress workers in flood-hit Madhya Pradesh's Chhindwara district have been accused of "attempting to murder" a senior district officer, whose face they blackened during a protest on Friday, the police said today.

A recording of the incident, shared widely on the internet, shows a large crowd of Congress workers being held back by the police and Sub Divisional Magistrate CP Patel during a protest in Chhindwara's Chaurai town to seek compensation for damages caused in the recent floods.

The video shows Congress leader Bunty Patel silencing the crowd amid speeches and sloganeering, and then lunging forward to smear a black substance on senior officer Patel's face.

"After the protesters smeared black colour on the SDM's face, 22 Congress workers, including Bunty Patel, have been booked," Superintendent of Police Vivek Agrawal said, adding that provisions of the Disaster Management Act-2005 have also been invoked based on a complaint filed by Mr Patel.

In his complaint, the SDM has said the accused "tried to choke me".

While the district unit of the Congress party has distanced itself from the incident saying Bunty Patel's actions are his own, BJP's district unit chief Vivek Sahu demanded strict action against all Congress workers involved.

"The Congress has been holding protests to draw the administration's attention towards the problems being faced by common people and farmers in the flood-hit areas. But Bunty Patel's actions (blackening the officer's face) did do on his own," district Congress office bearer Anand Bakhshi told news agency PTI.

Officials of the administration have also submitted a memorandum to the authorities demanding strict action against the accused.