The attack on the senior Bengal BJP spokesman and former MLA comes two days after a BJP leader was gunned down. 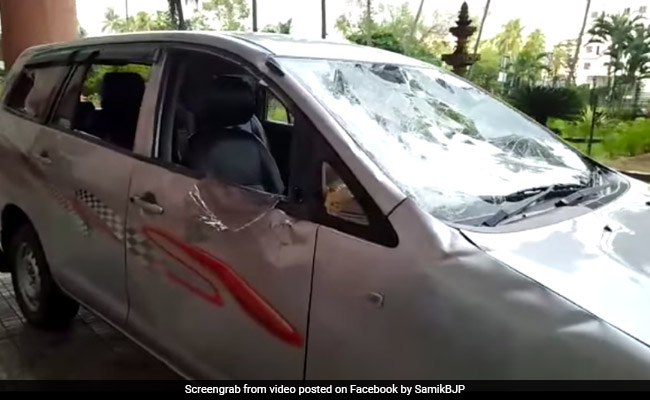 Samik Bhattacharya said it was a "completely unprovoked attack"

A senior Bengal BJP leader, Samik Bhattacharya, was attacked today at Mohanpur, 50 km from Kolkata, while on way to Diamond Harbour in South 24 Parganas district to attend a party function. The windscreen of his car was smashed, the driver assaulted and Mr Bhattacharya abused, dragged out of the car and thrashed, as he was on way to attend a party protest.

"It was a completely unprovoked attack," Mr Bhattacharya said, carried out "by around 150 to 200 people, who started hitting the car with iron rods, bricks and sharp implements". His phone and wallet were allegedly snatched and his hand was slashed with a knife.

"The Trinamool Congress attacked not just Mr Bhattacharya's car but many other vehicles in the convoy as we were driving to Diamond Harbour for an agitation in front of the sub-divisional office," said Umesh Das, a local BJP leader.

Local Trinamool leader Saikat Mollah said, "Now they have broken the windscreen of the car".

"Soon, they will break the bones of these BJP people because of the disgust at what happened at Hathras in Uttar Pradesh," he added, citing the alleged gang rape and brutalization of a 20-year-old from the Uttar Pradesh district that has triggered outrage across the nation.

Senior Trinamool leader Firhad Hakim, asked to react to such comments, said the party would look into the matter.

The BJP claimed they had trouble filing a complaint. They said the Falta police station, where they went first, had refused to register the complaint and sent them to the Diamond Harbour police station instead.

The attack on the senior Bengal BJP spokesman and former MLA comes two days after a BJP leader was gunned down. In another two days, the BJP plans to gherao Nabanna, the state secretariat which houses Chief Minister Mamata Banerjee's office.