At Sonia Gandhi's Dinner For Friends From 19 Parties, A Swipe At BJP

Sonia Gandhi, who is chairperson of the Congress-led national alliance UPA, had last month urged parties to set aside minor differences. 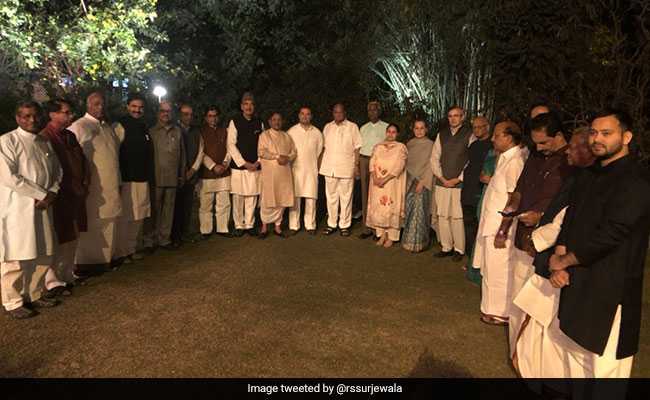 This was the second such interaction during the parliament's budget session

New Delhi: Leaders of 19 parties made it to the dinner hosted by Sonia Gandhi that was seen to be aimed at consolidating opposition unity in parliament and beyond, particularly the 2019 Lok Sabha elections. Rahul Gandhi, the Congress president called the dinner "an opportunity" for leaders to "meet and bond".

"Much political talk but much more important - tremendous positive energy, warmth and genuine affection," he tweeted.

The interaction is the second during parliament's budget session that has seen a united opposition disrupting proceedings non-stop for a week. The last one had 17 parties; Bahujan Samaj Party's Satish Chandra Misra and former BJP ally in Bihar Jiten Ram Manjhi, were key additions to this get together.

Sonia Gandhi, who is chairperson of the Congress-led national alliance UPA, had last month urged parties to set aside minor differences to get together in "the larger interest of keeping the BJP out of power," stating that she will work with like-minded political parties to defeat the BJP in the 2019 Lok Sabha election.

Outside, Sharad Yadav spoke of the dinner as one step closer to lining up the opposition on the same side at the 2019 Lok Sabha elections.

Tejashwi Yadav of the Rashtriya Janata Dal appeared to agree, contrasting the incremental improvement in the opposition ranks with the Telugu Desam Party pulling out its ministers from PM Narendra Modi's team.

"The opposition parties are united... and the NDA breaking apart," he said, pointing to Chandrababu Naidu's TDP and the Shiv Sena, the BJP ally from Maharashtra that has increasingly been its sharpest critic. "Today, the nation faces many difficulties," Randeep Singh Surjewala, the Congress communications in-charge said, blaming the government for not allowing them to raise the issues such as thousands of crores of rupees being taken out of the country under the government's watch.

But attendance at the dinner alone is unlikely to be an indicator of where the opposition parties stand ahead of the next general elections.

Akhilesh Yadav's Samajwadi Party, which had dropped the Congress as its alliance partner in the Lok Sabha by-elections and tied up with archrival BSP, was represented by his uncle Ram Gopal Yadav.

Promoted
Listen to the latest songs, only on JioSaavn.com
"I will work with you," Mamata Banerjee had said, greeting Mr Rao's suggestion with much enthusiasm. The Jharkhand Mukti Morcha's Hemant Soren, who was also at the dinner, had welcomed Mr Rao's initiative.