In Uttar Pradesh's Gautam Buddh Nagar, A Village That Shuts The BJP Out

The root cause of the villagers' disdain for the BJP is a long-standing issue between the villagers and the developer. 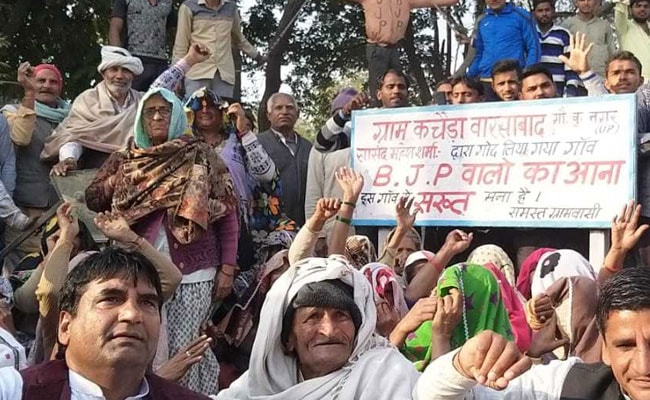 The protests began in October 2018, when villagers demanded higher compensation for land.

However, there is a certain village -- Kachera Varsabad -- where neither Mr Sharma nor any member of the BJP could canvass for votes in this time. When a few party workers tried to enter it on Tuesday, they were driven back by villagers who wouldn't have any of it.

Ironically, Kachera Varsabad is a village "adopted" by Mr Sharma.

The first sign of dissent can be traced back to October last year, when several individuals were arrested for protesting against a Noida-based realty group. The cause was a long-standing issue between the villagers and the developer.

In 2011, the realtor acquired around 1,500 bighas of land in Kachera Varsabad with the promise of  fair compensation and community amenities. However, things soured last year, when it allegedly destroyed crops in their fields and launched construction work with the backing of the administration. When some villagers resisted, they were allegedly arrested by the police and beaten up.

"It happened on Diwali night, around 2 am. Nobody in the village celebrated the festival that day. It didn't even look like Diwali," said Ravi Nagar, a shopkeeper.

According to Yogesh Nagar, a local dairy owner, some of the villagers reached out to Mr Sharma. "He promised to get the arrested people released in a day, but they remained there for 14 days," he said.

Upset over what they believed was a "betrayal", villagers pooled in money and put up a number of signages aimed at warning BJP leaders off at various entry points of Kachera Varsabad. "Kachera Varsabad, Mahesh Sharma ke god liye gaon mein BJP walon ka aana sakhta mana hai (This is Kachera, and people belonging to BJP are not allowed in this village adopted by Mahesh Sharma)," reads one put up at the main entrance of the village. 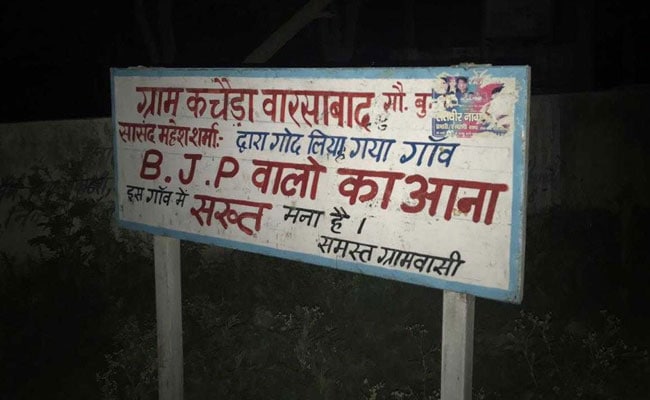 Upset villager put up boards around the village warning BJP leaders not to enter.

For more than six months, villagers have been protesting against the real estate project and Mr Sharma's alleged inaction on the matter.

Locals claimed that they were promised roads, clean water, a hospital, a college and other amenities by the developer when they handed over the land. The latter, however, only built some roads in the region and despite Sharma adopting the village, there has been no improvement.

"Can a mother leave her children and stay away for five years? No, right? For the sake of votes he (Mr Sharma) called this village his own and promised to take care of everything we need. But now we feel abandoned, and nobody knows where to go and find our mother," former village pradhan Sushil Nagar said.

Kachera Varsabad -- with around 4,500 eligible voters -- broke away from tradition and voted for Mr  Sharma, a Brahmin, in the last elections. This time, however, the village is backing BSP candidate Satveer Nagar. 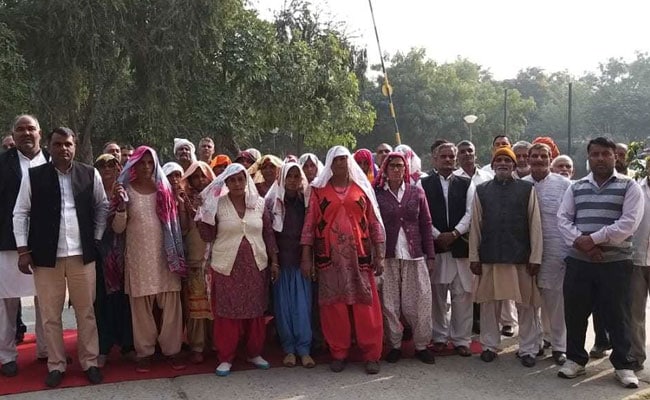 For more than six months, residents of the Kachera village have been protesting against the real estate project.

"In 2014, we voted for the BJP because there was a Modi wave. We thought that as the BJP was making so many promises, it will do something for the poor. But their promises turned out to be a big lie. Hum fass gaye hain (we are trapped), and now we want our old parliamentarian back," said Harinder Nagar, a resident.

Mr Sharma could not be reached for comment despite repeated attempts.