Ms Dabi, 24, and Mr Khan, 25, got married in Jaipur last month and their family and friends had attended the wedding celebrations in south Kashmir's Pahalgam on April 7.

Several bureaucrats from Rajasthan were seen at the reception. Both Ms Dabi and Mr Khan are Rajasthan-cadre Indian Administrative Service or IAS officers.

At a time when the country is seeing heated debates on communal disorder, the coming together of Ms Dabi and Mr Khan is being hailed by many as a beautiful example of love and peace.

Dalits across the country recently took to the streets to protest against changes in a law that they claimed would dilute the law that seeks to protect them from abuse and harm. In 2015, the community had celebrated when Tina Dabi became the first Dalit to top the prestigious civil services exam. 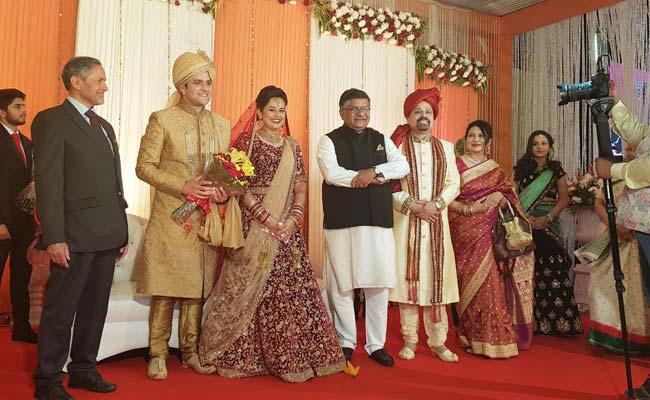 She is from Delhi and is a graduate of Lady Shri Ram College in the same city.

Athar Aamir Khan ranked second in his second attempt at the exam. In his first attempt in 2014, Mr Khan had got into the railways and was undergoing training at the Railways Institute of Transport Management in Lucknow.

He is from a village in Anantnag district, south Kashmir. Mr Khan became interested in joining IAS after Shah Faesal from Kashmir valley topped the civil services examination in 2009. Despite coming from a place that constantly faces terror attacks and where access to proper educational opportunities is missing, Mr Khan topping the exam was seen as an inspiration for youth in the valley.

Promoted
Listen to the latest songs, only on JioSaavn.com
Mr Khan and Ms Dabi had met at the Department of Personnel and Training in Delhi during their training, and they fell in love. The couple had faced communal backlash on social media when they announced their wedding plans last year.

Ms Dabi has said she does not let the comments affect her and for her, this marriage goes beyond the boundaries of religion.