2+2 meet: "In today's meet we have agreed to speed up the process of India's entry into the NSG (Nuclear Suppliers Group)," Foreign Minister Sushma Swaraj said

The Communications Compatibility and Security Agreement (COMCASA) was signed after External Affairs Minister Sushma Swaraj and Defence Minister Nirmala Sitharaman met their US counterparts, Secretary of State Mike Pompeo and Defense Secretary Jim Mattis, in the first 2+2 dialogue held between the two countries.

While Mike Pompeo termed the COMCASA agreement a "milestone" in US-India relationship, Ms Sitharaman asserted that the pact would enhance India's defence capability and preparedness.

"This meet was a focus on regional stability in South Asia, South-East Asia and Indo-Pacific... India being a part of groups like the ASEAN also help greatly in this endeavour," Foreign Minister Sushma Swaraj said. "In today's meet we have agreed to speed up the process of India's entry into the NSG (Nuclear Suppliers Group)," Ms Swaraj said.

Before coming to India, Mr Pompeo held talks in Islamabad with Pakistan's new government and senior most generals. 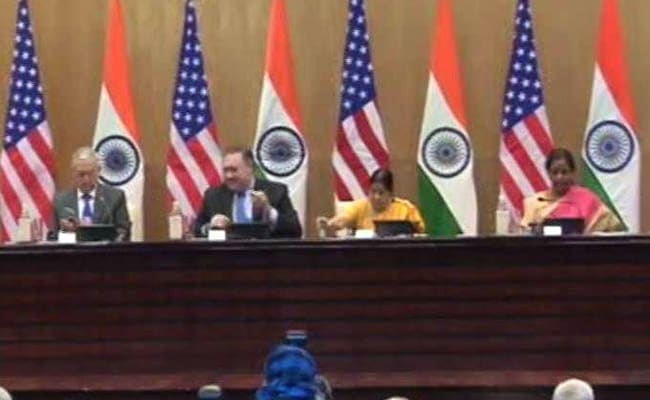 Experts believe the signing of the COMCASA could also reduce the chances of the United States imposing sanctions on India for looking to buy Russian S-400 surface-to-air missile systems.

"We have agreed on a hot line between... (Nirmala) Sitharaman and (Jim) Mattis," Mike Pompeo said. "India and the US stand for freedom and democratic values... and we aim to extend this across the Indo-Pacific... we will work at different levels to ensure a free Indo-Pacific," he said.

The presence of US troops in Afghanistan has heightened US sensitivity to the rivalry between nuclear-armed India and Pakistan. And, Washington and New Delhi share concerns over Pakistan-based anti-Western and anti-Indian terror groups.

Both the India and US have been keen to sign COMCASA which has now opened up the way for sales of more sensitive US military equipment to India.

"We have been discussing how we can more openly communicate back and forth because of the sensitivity of some of the technology... we have to know that when we share this with another like-minded nation, that we can keep it secure," Mr Mattis said earlier said. "I think that we're pretty much there already, on the American side," Mr Mattis had said.

The United States has emerged as India's second-largest arms supplier, closing $15 billion worth of deals in the past decade,

Once the communications accord is in place it could lead to the sale of an armed version of Guardian drones, as Washington has so far only authorised the sale of unarmed, surveillance versions of the aircraft.

Experts believe the agreement could reduce the chances of the United States imposing sanctions on India for looking to buy Russian S-400 surface-to-air missile systems.

The United States has imposed sweeping sanctions on Russia, under which any country engaged with its defence and intelligence sectors could face secondary US sanctions.

However, a new defence bill proposes giving the US president authority to grant waivers when national security interests are at stake.

The United States is also pushing countries to halt oil imports from Iran after US President Donald Trump withdrew from a 2015 deal between Iran and six world powers that was intended to stall Tehran's developing nuclear capabilities.

India is Iran's top oil buyer after China, and it is seeking a waiver from the United States.

Ahead of the talks in New Delhi, a senior US State Department official said the United States was engaged in "very detailed conversations" with India over Washington's request to completely stop India's oil imports from Iran.

"We're asking all of our partners, not just India, to reduce to zero oil imports from Iran and so I'm confident that will be part of our conversation with India," the official told reporters accompanying Mr Pompeo.