The Chief Minister met Nurul Haque and was overwhelmed. He commended car innovator Nurul Haque for the gesture. 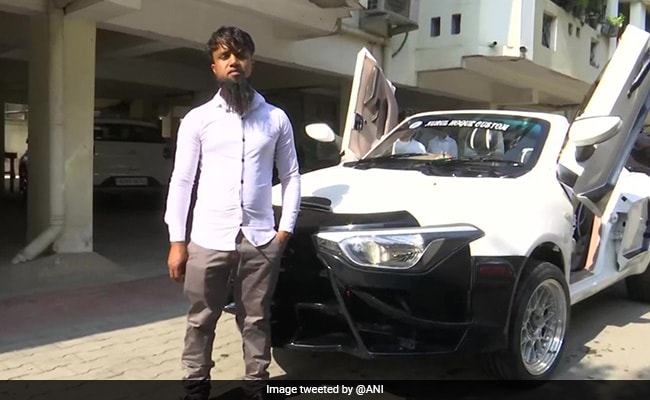 The motor mechanic said he spent Rs 10 lakh on his project.

Mr Sarma on Saturday tweeted acknowledging the efforts by the 31-year-old and said: "Delighted to receive a modified Lamborghini lookalike car from innovator Nurul Haque of Anipur, Karimganj. My best wishes to him in all his future endeavours."

Mr Haque, a motor mechanic from Assam's Karimganj district, modified an old Maruti Swift into a luxury version making a Lamborghini of it and on Friday reached Guwahati to gift the vehicle to Mr Sarma.

The Chief Minister met Nurul Haque and was overwhelmed. He commended Haque for the gesture.

Wrapped up my day at Silchar with a walk from Itkhola to Circuit House along with our karyakartas. Happy to meet a lot of warm-hearted along the way.

Also had the thrill of being at the wheel of a 'Lamborghini' assembled by Nurul Haque, a car enthusiast from Karimganj. pic.twitter.com/7EMsG4MtbT

The Assam chief minister had seen Haque's Lamborghini in Silchar during his visit to the administrative headquarters in the Cachar district.

Mr Sarma after meeting Haque in Silchar district earlier had tweeted, "Had the thrill of being at the wheel of a 'Lamborghini' assembled by Nurul Haque, a car enthusiast from Karimganj."

The motor mechanic from the Bhanga area of Karimganj had told ANI that he spent more than Rs 10 lakh on his project as he "always wanted to drive a sports car like Lamborghini".

"Earlier, I worked as a motor mechanic in Dimapur (Nagaland) and started to modify cars. Last year, too, I modified a car into a sports vehicle that looks like a Lamborghini. After that, I went on to modify another car into a replica of a Lamborghini, which I will gift to Assam Chief Minister Dr Himanta Biswa Sarma. It took about four months to modify an old Swift into a Lamborghini," Mr Haque had told ANI earlier.

"I am next planning on modifying another car into a Ferrari. I will do more such projects if the government lends a hand," Haque added.