Assam has put a stamp on the grand victory of NDA in the first phase of the Assembly election, the Prime Minister said. 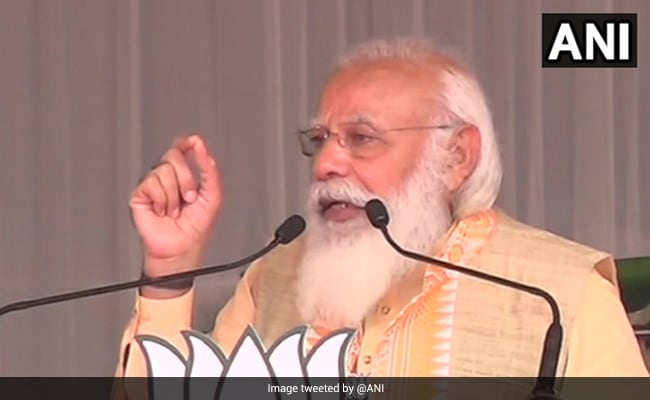 Addressing a public rally in Kokrajhar, PM Modi said, "Football is very popular among youth here. If I have to speak in their language, I would say that the people have yet again shown a red card to Congress and its Mahajot. People of Assam trust the NDA for the development, peace, security of the state. This is an election between the 'maha jhooth' of Mahajot (Congress-AIUDF grand alliance) and 'maha vikas' of the double engine government."

Assam has put a stamp on the grand victory of NDA in the first phase of the Assembly election, the Prime Minister said.

Detailing the BJP government's developmental initiatives in the state, PM Modi said, "Medical college is being set up in Kokrajhar at a rapid pace. A package of Rs 1,500 crore has also been provided for development. Bodoland University, Central Institute of Technology, Bodoland Bhawan and several other institutions are becoming the identity of this region."

"From providing land pattas to over 3.25 lakh families, increasing rates of workers to making the life of women working in tea gardens, the NDA government has tried to bring all-round development in Assam," PM Modi added.

"With the mantra of 'sabka saath sabka vikas sabka vishwas', the NDA government is working here for your welfare," he said.

Polling for the second phase of the Assam assembly election is underway.

According to the Election Commission of India (ECI), Assam recorded a voter turnout of 10.51 per cent till 9.30 am across 39 constituencies in 13 districts during the second phase of the state assembly polls.

A total of 345 candidates in 39 constituencies across 13 districts are contesting in this phase of voting.

Polling for the third and last phase will be held on April 6. The counting of votes will take place on May 2.