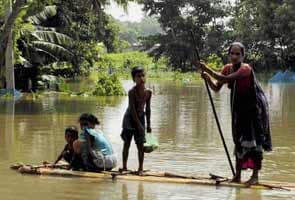 Guwahati: Assam on Monday reeled under the impact of floods with the Brahmputra and its tributaries playing havoc in 27 districts of the state affecting nearly 24 lakh people and taking the death toll to 124.

However, there was a glimmer of hope for the flood affected with Brahmaputra and its tributaries starting to recede today though it was still flowing well above the danger level in most of the affected districts.

Besides the 124 people killed in the calamity, 16 others perished in landslides and 17 more were reported missing. Large-scale destruction of infrastructure, cropland and wildlife have been reported from different areas.

An estimated 24 lakh people have been victims of the worst-ever flood in recent years, causing large-scale devastation in 4,540 villages with more than 9.35 lakh hectares of land lying inundated.

The flood water has not only submerged 2.55 lakh hectares of cropland but has caused widespread destruction in the world-famous Kaziranga National Park where more than 560 animals, including 14 rhinos, were killed.

The situation in the world's largest river island Majuli is also grim with almost the entire island under water.

Road services have been affected at 2,847 places while railway tracks, damaged by landslides in the Lumding-Badarpur Railway division, were yet to be restored.

An estimated five lakh people have taken shelter in 630 relief camps and 150 medical teams have been deployed to provide medical aid while 30 camps have been set up for cattle, sources said.
Comments
Assam floodAssam flood tollAssam flood updateBrahmaputra level receding