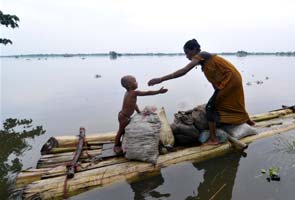 Guwahati: The overall flood situation in Assam further worsened on Thursday as fresh areas came under water. The death toll rose to 30 and many others went missing in a boat capsize in Goalpara district.

Official sources said the country boat was carrying about 100 passengers from Kothalbari to Sutarpara through a swollen water pond when it capsized. Some passengers swam to safety while bodies of four persons were fished out.

The Goalpara administration has ordered a probe into the incident but some passengers are still missing.

Meanwhile, incessant rains continued to lash many parts of the state resulting in alarming rise of water level of the Brahmaputra river in 23 of the 27 districts.

The flood scene was critical in Dhemaji, Lakhimpur, Dibrugarh, Jorhat, Nalbari, Barpeta and Dhubri districts where water has engulfed fresh areas of human habitation and cropland.

More than five lakh people have been affected in this wave of the floods which have threatened the existence of Majuli, the world's largest inhabited river island. The situation in the island was unchanged even as there was no fresh rainfall.

The Kaziranga National Park, a world heritage site, and Pabitora sanctuary, both housing the highly endangered one horned rhino, are under flood waters.