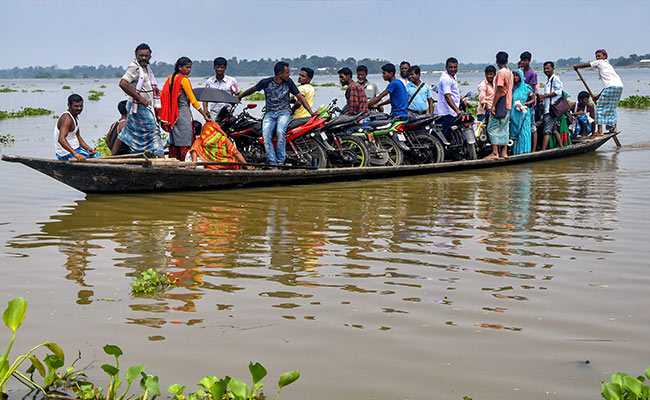 Assam Floods: The NDRF along with state agencies are leading the rescue operations

The situation in Assam worsened on Saturday as floods in the state claimed another life, taking the number of deaths to seven as as over 14 lakh people were affected by the deluge across 25 districts of the state. Chief Minister Sarbananda Sonowal called Union Home Minister Amit Shah and briefed him about the latest flood situation in the state. Mr Shah has assured all help from the Centre to the north eastern state and asked the Assam government to ensure all-out efforts to provide relief to the flood-affected. At present, over 14.06 lakh persons have been affected by the floods in Dhemaji, Lakhimpur, Biswanath, Sonitpur, Darrang, Baksa, Barpeta, Nalbari, Chirang, Bongaigaon, Kokrajhar, Dhubri, Goalpara, Kamrup, Morigaon, Hojai, Nagaon, Golaghat, Majuli, Jorhat, Sivasagar, Dibrugarh, Tinsukia, Cacha and West Karbi Anglong districts, the Assam State Disaster Management Authority said. Barpeta is the worst hit with 5.22 lakh people suffering, followed by Dhemaji (1.38 lakh people) and Morigaon (nearly 95,000 persons). Currently, the Brahmaputra at Guwahati, Nimatighat in Jorhat, Tezpur in Sonitpur, Goalpara and Dhubri towns, while the Barak at AP Ghat in Cachar and Badarpurghat in Karimganj are flowing above the danger mark.

Here are the highlights on situation in Assam:

Assam: Troops of Indian Army along with SDRF & Civil Administration conducted rescue operations & evacuated around 150 villagers who were stranded in Balipur Char of Baksa District. The villagers were shifted to flood relief shelters in Odalguri village. pic.twitter.com/iqihLVjmsU

#WATCH: Building of a Primary School in Tengaguri area of Morigaon district collapsed due to the increasing water in the Brahmaputra River flowing through the region, yesterday. #Assampic.twitter.com/AYoEUydJup

Jul 13, 2019 20:12 (IST)
The India Metrological Department (IMD) said that Assam and Bihar have received excessive rainfall with an extremely heavy down pour in the last three to four days. The weather department has predicted heavy rainfall in the two states in the next 48 hours.
Jul 13, 2019 20:06 (IST)
Centre assures Assam all help to tackle floods:

Delhi: Home Minister,Amit Shah today chaired a high level meeting to review the current flood situation in different parts of the country and the preparedness of the States and Central Ministries / Agencies concerned to deal with the situation. pic.twitter.com/TKBRAB42P5

Assam: The part of the Brahmaputra river which flows through Guwahati is now flowing above danger mark following rainfall in the region. Water has reached near the feet of the statue of Lord Vishnu on the vertical pillar (pic 1) in the river near Chakreshwar Temple in Kalipur. pic.twitter.com/S5HyckmzKY

Dibrugarh: Locals of at least 52 villages in Moran are left at lurch after flood water entered their houses. Villagers are being shifted to safer places. #Assampic.twitter.com/v7Itb99l3m

Held a discussion with Union Home Minister Shri @AmitShah ji over phone this morning. Apprised him of the prevailing flood situation in Assam and measures taken by the state govt.

The Hon'ble Minister assured all possible support from the Centre to deal with the situation. 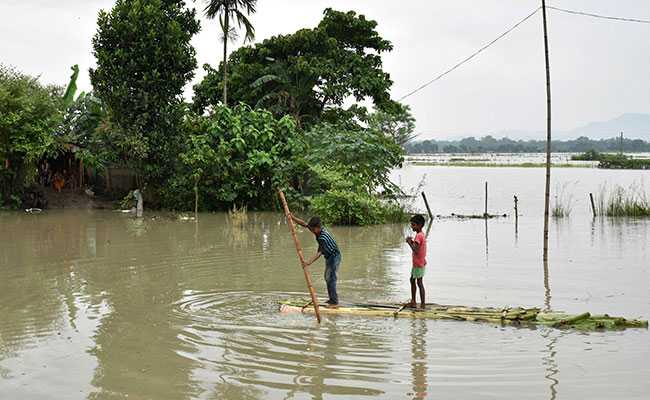 Dhemaji and Lakhimpur in the tea-rich Upper Assam, and Bongaigaon and Barpeta in Lower Assam are the worst hit. Officials said floodwaters from the higher areas will flow towards the valleys, worsening the situation in Lower Assam areas.
Jul 13, 2019 11:42 (IST)
Barpeta is the worst-affected with over 85,000 people seeking shelter, said the Assam State Disaster Management Authority.
Jul 13, 2019 10:00 (IST) 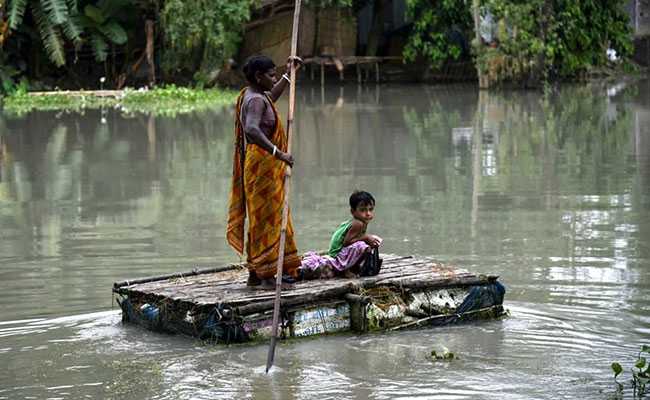 Among the 17 districts, Barpeta is the worst-affected with over 85,000 people seeking shelter, said the Assam State Disaster Management Authority.
Jul 13, 2019 09:35 (IST)
The Brahmaputra river - one of the largest rivers in the world that cuts through Assam's biggest city Guwahati - and five other rivers are flowing above the danger mark, officials said. Six people died due the floods.