Three persons died in Dibrugarh district, two each in Tinsukia and Barpeta, while one each in Biswanath and Golaghat districts, according to the daily flood bulletin of the Assam State Disaster Management Authority (ASDMA) 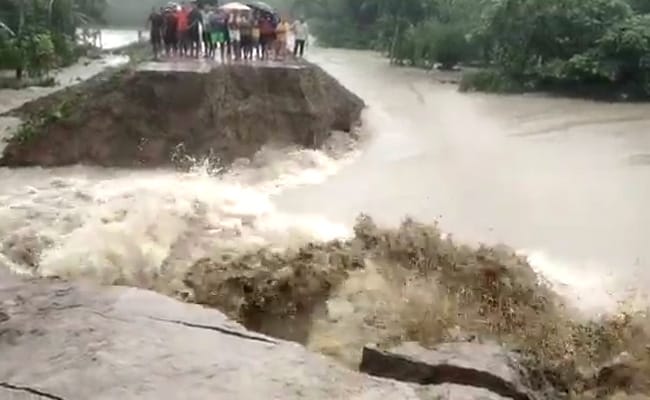 Flood waters have submerged over 1.28 lakh hectares of cropland. (file)

Nine more people died in flood-related incidents in Assam on Tuesday and 33 lakh people across 28 districts of the state are affected by the deluge, as per an official bulletin.

Three persons died in Dibrugarh district, two each in Tinsukia and Barpeta, while one each in Biswanath and Golaghat districts, according to the daily flood bulletin of the Assam State Disaster Management Authority (ASDMA).

So far, 85 people have died in the state in flood-related incidents, it said.

Floods had affected nearly 22 lakh people across 27 districts on Monday.

The swelling waters of the Brahmaputra and its tributaries have gushed into the Kaziranga National Park, forcing tigers and other animals to flee to human habitats and highlands for survival.

A Royal Bengal tiger entered a goat shed of a villager in Kandolimari village in Agoratoli forest range of the park on Monday and left the site later in the night, local officials said.

Two more tigers were sighted on Tuesday trying to escape floodwaters, according to park officials who said the big cats strayed into the Baghmari village area.

One of the tigers later moved towards Karbi Anglong district and reached there safely, while another one is at present near the National Highway 37, they said.

On Tuesday morning, a one-year old rhino was rescued from near the Sukani camp of Agartoli range of the Kaziranga National Park.

So far this year, 102 animals have been rescued, while 51 were killed in flood-related incidents in Kaziranga, the officials said.

Flood waters have submerged over 1.28 lakh hectares of cropland.

Assam Chief Minister Sarbananda Sonowal visited Jonai in Dhemaji district during the day and reviewed the flood situation there.

He also took stock of the prevalent scenario in Lakhimpur and his home constituency Majuli.

The Water Resource Department (WRD) was directed to prevent flooding from the Suwansiri and the Dikrong rivers in Jamuguri and Siyang river at Jonai, and attend to the damage caused to the Kenmili embankment in Majuli, among others.

Stressing on the need to dredge the Brahmaputra as its water carrying capacity has reduced over the years, Mr Sonowal said work on it would start soon.

Noting that strengthening of river management in neighbouring states would help in preventing floods effectively in Assam, he asked WRD engineers to bring innovation and newer technologies for the flood prevention mechanism in the state.