Out of the 12 points of disputes between Assam and Meghalaya, six areas with relatively less critical differences were taken up in the first phase. 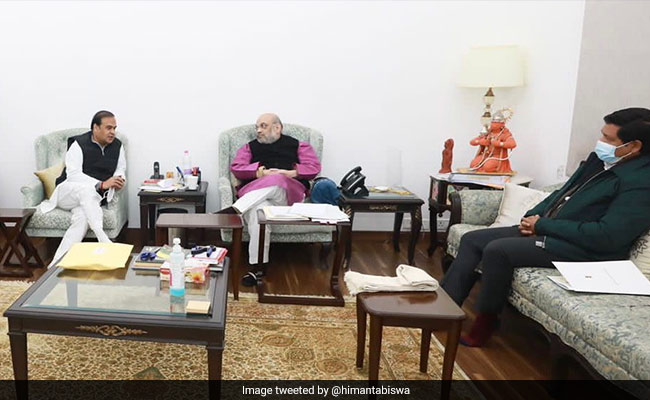 A detailed report by both state chief ministers of Assam and Meghalaya was submitted to Amit Shah.

The two warring northeastern states Assam and Meghalaya have decided to end their five-decade-old disputes regarding their border and have drawn a road map to proceed with the division of their natural boundaries such as rivers and forests.

For more than fifty years, the two states have been in a tussle over 36 villages in the six places of difference, covering an area of 36.79 square kilometres.

A detailed report by both state chief ministers of Assam and Meghalaya - Himanta Biswa Sarma and Conrad Sangma - was submitted to Union Home Minister Amit Shah when they met him in Delhi.

"A report has been submitted by both CMs, now the centre will review it and take it forward," a senior MHA official told NDTV.

According to him, both states have submitted a rough structure and MHA will take decisions now as per law. "It was a fifty-year-old dispute and after a lengthy exercise, some decisions have been more or less finalised by them," he explained, adding that boundary demarcation will be done after the due procedure in the Parliament.

As per information, the two states have agreed on the villages in the border areas and identified natural boundaries such as rivers and forests.

"I along with HCM Meghalaya Sri @SangmaConrad met Adarniya Griha Mantri Sri @AmitShah ji in New Delhi. We apprised Hon HM on the outcomes of discussions held between Assam & Meghalaya governments to resolve the border disputes amicably. We're grateful for his guidance," Mr Sarma tweeted after attending the hour-long meeting along with Mr Sangma.

We're grateful for his guidance.@HMOIndiapic.twitter.com/uDkClkLwuo

The Meghalaya chief minister also tweeted about the meeting. "Called on Hon'ble HM, @AmitShah ji with HCM of Assam, @himantabiswa ji and apprised him on the reports of the Regional Committees. He expressed happiness on the initiative taken by both the States in the matter. MHA will examine the reports & we will meet HM again post 26th Jan," he said.

Mr Sarma had on Wednesday said the two states would submit their recommendations to the Centre and urge it to take the matter forward.

"The Assam-Meghalaya border issue was discussed in the (state) cabinet. The regional committees of both the states have come to a consensus, and agreement has also been reached at the chief minister level," he had said.

"The Union Home Ministry is now expected to finalise a "conclusion" but more or less the structure has been reached after a long-drawn exercise between the two states," Mr Sangma had said.

Last year in August, three committees each were formed by the two states after two rounds of talks between Mr Sarma and Mr Sangma were held to resolve the vexed border dispute in a phased manner.

As per the joint final set of recommendations given by the committees, out of 36.79 square kilometers of the disputed area taken up for settlement in the first phase, Assam will get full control of 18.51 sq km and Meghalaya of 18.28 sq km.

Out of the 12 points of disputes between Assam and Meghalaya, six areas with relatively less critical differences were taken up in the first phase.

Meghalaya was carved out of Assam as a separate state in 1972 and it had challenged the Assam Reorganisation Act, 1971, leading to disputes in 12 areas along the 884.9-km-long border.