Prime Minister Narendra Modi and Union Home Minister Amit Shah will arrive in Assam over this weekend to campaign for Assam Assembly elections. 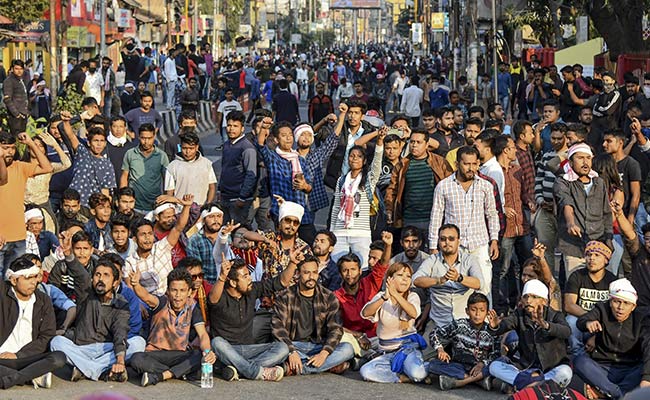 The All Assam Students' Union (AASU) has said its three-day protests will start from Friday. (File)

Ahead of Prime Minister Narendra Modi's and Union Home Minister Amit Shah's visits to Assam over this weekend, the All Assam Students' Union (AASU) has decided to launch a state-wide protest on the controversial Citizenship Amendment Act (CAA) that started a wave of agitation across the country in 2019 and riots in Delhi.

PM Modi will kick off the campaign for ensuing Assam Assembly elections with a public rally in Upper Assam's Sivasagar on January 23. He will distribute property deeds to landless families.

Mr Shah, who is expected to arrive the next day, will take part in some government programmes and address rallies in Kokrajhar and Nalbari districts.

AASU, which wields considerable influence in the BJP-ruled state, has said its three-day protests - planned to include burning of copies of the citizenship law, black band and torch rallies - will start from Friday.

"On January 22, all the district units of AASU will hold a torch light rally. On January 23, we will wear black badges ahead of PM Modi's first visit to state this year. During the visit of the Union Home Minister on January 24, we will hoist black flags and burn copies of CAA across the state," AASU President Dipanka Kumar Nath said announcing the schedule.

"The BJP-led government had promised to seal the porous Indo-Bangladesh border. However, that has not materialized. The government has failed to implement Clause 6 of the Assam Accord," he added.

AASU was part of the Centre's high-level committee on Clause 6 of Assam Accord, which guarantees constitutional, legislative and administrative safeguards to protect, preserve and promote the culture, social, linguistic identity and heritage of the Assamese people.

In August last year, AASU released the confidential report saying they have given their suggestions "months ago", but the government was "sitting idle".

It added that people have the right to know the report's contents, which reportedly sought to implement the Assam Accord in letter and spirit and asked the government to promptly seal the India-Bangladesh border.

In 2016, the BJP came to power in Assam promising to drive out illegal migrants. However, the non-implementation of CAA has angered many organisations that have accused the party of inaction.