"Confident Of Running The 1st Bullet Train In 2026": Railways Minister

Ashwini Vaishnaw was in Surat to inspect the progress of the government's ambitious Ahmedabad-Mumbai bullet train project. 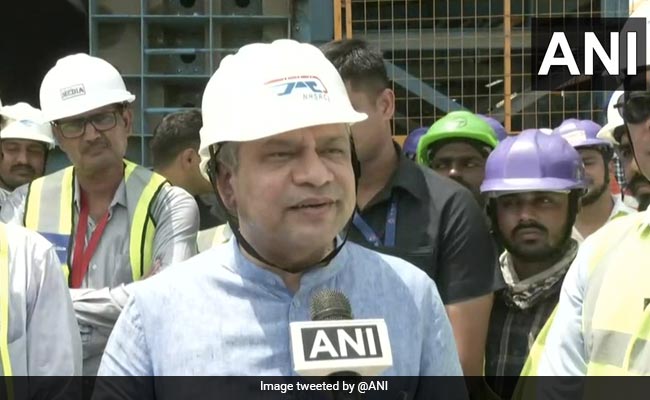 Ashwini Vaishnaw said the bullet train is a national project and there should be no politics.

Railway Minister Ashwini Vaishnaw on Monday said they are confident of achieving the target of running the country's first bullet train between Surat and Bilimora in Gujarat in 2026 as good progress has been made in this direction.

Mr Vaishnaw was in Surat to inspect the progress of the government's ambitious Ahmedabad-Mumbai bullet train project.

There has been good progress in the construction of infrastructure for the bullet train between Ahmedabad and Mumbai, and the work is being done at a high speed.

"We are keeping the target of running the first bullet train between Surat and Bilimora in 2026. The progress is very good, and we are confident of running the train by that time," he told reporters.

Bilimora is a town in Navsari district of south Gujarat.

The project is aimed at running the bullet train between Ahmedabad and Mumbai on a high speed rail (HSR) corridor at a speed of 320 kmph, covering a distance of 508 km and 12 stations. The train is expected to reduce the travel time between the two cities to about three hours from the current six hours.

The Japan International Cooperation Agency (JICA) is funding 81 per cent of project cost which is estimated at Rs 1.1 lakh crore.

Mr Vaishnaw said pillars for the bullet train project have been put up on 61 km of the route and work is underway on around 150 km of the stretch.

Vaishnav inspected the operation of a segmental casting yard of the Mumbai-Ahmedabad High Speed Rail Corridor near Vaktana village in Choryasi taluka of Surat, and also visited the under-construction Antroli railway station under the project.

Later, he also visited the project site at Nasilpore in Navsari along with Minister of State for Railways Darshana Jardosh Jardosh.

Asked about the progress of the bullet train project in neighbouring Maharashtra, Railways Minister Ashwini Vaishnaw said it was slow due to land acquisition issues. He said Maharashtra should work with the spirit of cooperation and collaboration on the project.

"This is a national project and there should not be any politics over it," he said.

"I believe we would set an example of working together on this project...The progress (in Maharashtra section) is slow. We hope there will be more progress," he said.

But, at the same time, the 352 km section in Gujarat is also sufficiently long, he said, adding that the focus will remain on Gujarat until the work of land acquisition in Maharashtra is completed.

Earlier, addressing the bullet train project workers at a site in Surat, Mr Vaishnaw informed them about the Centre's 'One Nation, One Ration' scheme, whereby they can get food grains in any part of the country where they are working.

The central government is working with the spirit of service and development of all under the leadership of Prime Minister Modi, he said.