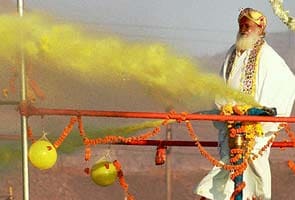 Mumbai: Self-proclaimed spiritual guru Asaram Bapu defied the Maharashtra government's orders today by continuing to indulge in pre-Holi celebrations, using thousands of litres of water at a time when the state is facing its worst drought since 1972.

On Sunday, Asaram Bapu and his followers used a minimum of 50,000 litres of drinking water for Holi revelries in Nagpur's Kasturchand Park. Dressed in a pink dress and matching headgear, Asaram used two pipes and poured yellow-coloured water on thousands of followers swaying to Holi songs. Five tankers with a capacity of 10,000 litres each were sourced from the Nagpur Municipal Corporation (NMC) apart from availing water from private tankers. Angered by the insensitivity, members of the anti-superstition NGO Andhashradhha Nirmulan Samiti protested against Asaram Bapu's callous indulgence. NMC officials then issued a notice to his group for misusing drinking water allotted to them.

Today, Asaram Bapu was scheduled to hold another celebration in Navi Mumbai. Taking note of his plans, Balasaheb Thorat, the state's Revenue Minister, issued prohibitory orders directing the area's civic body to not allow water to be wasted for such large-scale Holi celebrations. "At a time when the state is facing such acute shortage of water, we cannot waste water in this way," Mr Thorat told reporters after informing the Maharashtra Assembly.

But despite the orders, the festivities continued in Navi Mumbai. The self-proclaimed spiritual guru's followers availed tankers after tankers of water from private sources. Upset with the media's criticism of their leader's ill-timed function, the followers pelted stones at journalists, injuring three mediapersons. The police said they have arrested three people and detained 15 others for the offence.

Promoted
Listen to the latest songs, only on JioSaavn.com
Before the violence took place, Asaram Bapu, at his public rally, claimed only "50 grams" of water was used per person and that, the media had made a mountain out of a molehill. Speaking to his followers in Hindi, Asaram Bapu then abused the media. "The media says I am wasting water...So should I do what these bastards say?" he said as his followers broke into another round of applause.

Maharashtra's Home Minister RR Patil confirmed that the attack on the media took place after a provocative speech. "We are investigating the matter and will get a report by tomorrow. Whoever has instigated the mob will not be spared. We will take strict action," Mr Patil assured.
Comments
Asaram Bapu