As Chennai Runs Out Of Water, 9 Million Pray For Rain: Foreign Media

A severe water shortage is stalking Chennai, whose metropolitan area is home to 9 million people 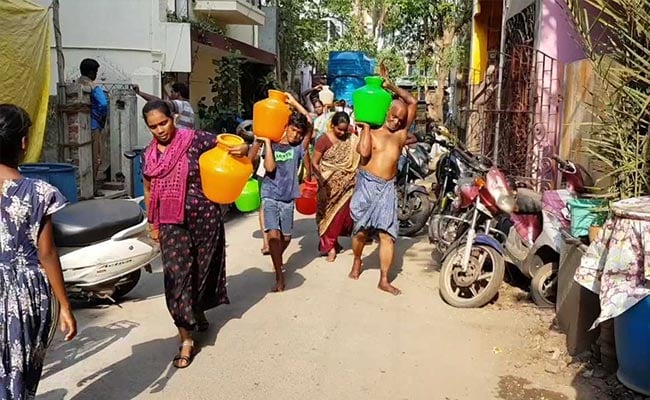 The wait for water begins in the dark at 4 a.m. By the time A. Vani reaches the public pump, a dozen women are already in line.

The taps in Vani's home in a working-class suburb of this South Indian city ran dry a month ago. Now her entire morning is spent chasing water, then carefully rationing it for washing, bathing and cooking. She used to open her beauty parlor at 10 a.m., but now she is lucky if she gets there by early afternoon.

As the sun rises, so, too, does the heat, heading toward a high of 109 degrees. Finally, at 8 a.m., water spills from the pump. But the flow is erratic, requiring a 10-minute wait before the next vessel can be filled. A sharp argument erupts between neighbors over whose turn is next. Last month, a woman in the area was stabbed when a fight over water turned violent.

The situation is "mental torture," said Vani, 44, hoisting a neon-colored plastic pot full of water to her waist before starting on the walk home. But, she added, "whatever lengths we have to go to get water, we will do it. There is no other way."

A severe water shortage is stalking Chennai, whose metropolitan area is home to 9 million people. The city's reservoirs and lakes are parched and its wells have run dry after two years of scanty rains here. Local authorities are trucking in water and desalinating seawater, but the overall supply is 40 per cent less than the city's basic requirement.

The daily travails of millions of people in Chennai are a harbinger of things to come for the country, warn experts, who say India faces a looming water crisis as its population grows, urbanization intensifies and global temperatures rise.

"This year it is Chennai," said Samrat Basak, a water expert at the World Resources Institute. But "Bangalore, Hyderabad and Delhi are all facing similar water scarcity," he said. Together, the four cities are home to approximately 60 million people, the United Nations estimates.

India is the world's largest user of groundwater - an underground resource that excludes lakes and reservoirs. Twelve major urban areas have been using groundwater at an unsustainable rate since at least 2013, according to data provided by the planning arm of the Indian government.

"This is a man-made crisis," said Sekhar Raghavan, director of the Rain Centre in Chennai and a longtime expert on the city's water issues. As Chennai has grown, natural water bodies have been squeezed and polluted by the expanding metropolis. Like much of India, the city relies on yearly monsoon rains for its water needs. If the rains fail again this year, "Chennai will be unlivable," Raghavan said.

For many residents, that moment is already here. G. Yogesh, a 31-year-old who works for one of the city's many information-technology firms, recently moved because the new apartment offered a better water supply. But about a month ago, a nearby open well dried up. Then the water from both the public and private pumps came only intermittently, and finally there was no water at all.

First Yogesh's family began ordering water from government-run trucks, which would deliver about 9,000 liters (about 2,380 gallons) for $10. As the crisis dragged on, the wait times grew longer and longer. So the family began contacting private tankers, which were selling water for six times the price.

"General hygiene has taken a hit," Yogesh said. "There are no long showers anymore. I take a bath with just five or six mugs. We use the washing machine sparingly, washing only what's essential." At his office, before using the toilet, he has to check whether there is water in a nearby drum, then fill a cistern manually so he can flush.

"This was not a sudden, apocalyptic thing. This is the result of slow degradation," Yogesh said, blaming a lack of political will and public ignorance for the city's plight. "There is only one backup plan - to leave the city."

Local officials attribute the current predicament to two consecutive years of drought. In response, the city plans to open two new plants to desalinate seawater within the next five years, according to T. Prabhushankar, executive director of the Chennai Metro Water Supply and Sewerage Board. It has also commissioned two plants to convert waste water for industrial use, he said.

Ironically, Chennai is the only major city in the country where rainwater harvesting is already mandated by law in buildings. But the legislation has not been rigorously implemented or monitored, said Raghavan, of the Rain Centre. Now he says he gets more than a dozen calls a day from ordinary citizens wanting to know how they can set up their own structures to store rainwater.

The water shortage has hit businesses, schools, hotels and hospitals. Restaurants are struggling to stay open. R. Selvam has run an eatery in Royapettah, a neighborhood of small, congested alleys, for more than 40 years. This month, for the first time, he started closing for most of the day, serving only breakfast.

"I cannot afford to buy water, and the prices are rising," he said.

Other people in Chennai say they have reached a breaking point. Gynecologist Bala Kumari, 60, has run a small maternity hospital for the past 15 years. The neighborhood where she lives and works had long-standing problems with its water supply, so she paid about $430 a month to ensure the hospital had a steady supply from private trucks.

Then came the water crisis. As demand ballooned, the water trucks were no longer delivering on time despite the payments. Kumari was forced to reduce her staff and turn away patients. She says she is considering selling the hospital and leaving the city altogether.

"One day there will be no water, and I will have to shut the hospital," she said. "How can I run a hospital without water?"