The Paruthapattu Lake in the northern part of the city, which was severely encroached on and polluted has been cleaned and converted into an 85-acre reservoir in an extensive Rs 28 crore project that involved the relocation of 500 people

While four major reservoirs supplying drinking water to Chennai remain parched and bone-dry, triggering unprecedented water scarcity in the city, one lake in Avadi, in the northern part of the city, brims with water.

Seen as a success story, the 85-acre Paruthapattu Lake, which was encroached on and ridden with sewage till last year, sports a brand-new look - cleaned, desilted and rejuvenated as a bio park. The Rs 28 crore project involved the relocation of approximately 500 people and has converted the lake into a 12-feet deep lake with a three-kilometre-long bund that doubles up as a walkers' lane.

In addition, a Rs 35 crore sewage treatment plant built on the lake's shore will treat sewage from the Avadi municipality and pump one crore litres of recycled water into the lake from next week. The project will also sell an equal amount of water for industrial use.

The brain behind the project is Avadi legislator K Pandiarajan, popularly called Ma Foi Pandiarajan, who is also the Tamil Nadu Culture Minister.

"It's an example of restoration of water bodies. Avadi is like a lake district with fifteen such lakes. We would restore all of these and link them all the way they were earlier," he told NDTV. 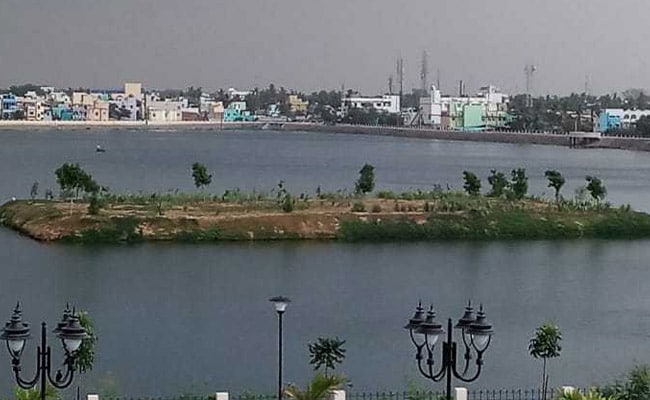 The Avadi lake is unlikely to help people hit by the ongoing water crisis, at least not immediately. Mr Pandiarajan believes the quality of the water is not yet suitable for human consumption.

"I think we need to have a little higher quality for making it consumption worthy from drinking point of view. First we are trying to use some non-traditional methods like Vetriver floats (almost similar to what was used on the Ganges) and oxygen infusion," he explained, adding, "We would try to look at all those aspects and see whatever is viable to draw water from here."

So what went wrong with the other lakes?

However, experts say last year's failed monsoon, shoddy desilting due to corruption and large-scale concretisation, and indiscriminate sinking of bore wells have reduced the re-charging of ground water and resulted in the water table touching new lows.

Arun Krishnamurthy, the founder of Environmentalist Foundation of India, an organisation that has restored many lakes, believes it is time for the state government to revive rain water harvesting progammes that were mandatory in the early 2000s.

Many believe rain water harvesting is not being strictly enforced now.

"All of us cannot keep ploughing the ground below through bore wells. The bore well system need to be closed. There should be a metering system for the amount of water we use. Water recycling and reuse should be heavily promoted," he told NDTV.

A report by the EU drought observatory warns "more than a hundred million people are currently affected by drought" and says Tamil Nadu and Andhra Pradesh are at "high risk" because of "substantial lack of rain".

The same report also states that the "severe deficiency" in water supply that has affected Maharashtra and Karnataka "requires more than a good monsoon". However, the report continues, over the past four years, those two states have received less than half of expected average rainfall.

Although the Avadi lake cannot solve the Chennai water crisis on its own, if everything goes well, it could quench the city's thirst to some extent