Groundwater in Chennai and surrounding areas is fed by Puzhal and four other lakes - Sholavaram, Kaliveli, Pulicat and Maduranthakam - all located within a 60-kilometre radius of the city 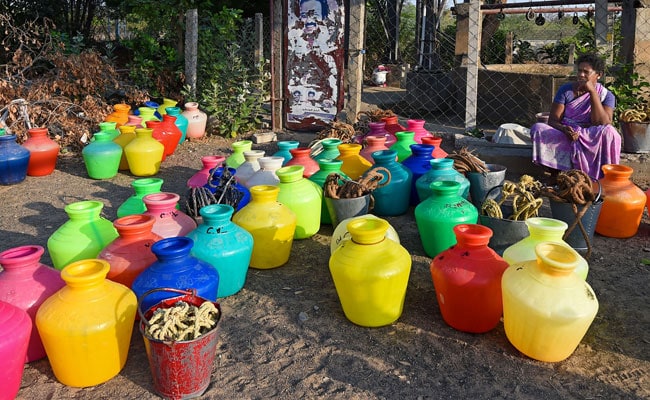 As Chennai battles a water crisis that has forced authorities to cut piped water supply by 40 per cent, a dramatic time-lapse video of satellite images showing a lake drying up has emerged. The video, compiled from satellite images released by ESA Sentinel shows rapidly depleting water levels in Puzhal lake - one of five key water bodies feeding the city - between April and June - highlighting the severity of the situation.

Groundwater in Chennai and surrounding areas is fed by Puzhal and four other lakes - Sholavaram, Kaliveli, Pulicat and Maduranthakam; all are located within a 60-kilometre radius of the city. However, encroachments on these water bodies, a long-standing issue, have significantly reduced each lake's ability to hold water and replenish underwater tables.

The Madras High Court criticised the state earlier this month for not doing enough to desilt and clear the lakes of those encroachments. "True that there is failure of monsoon for quite some time now (but) encroachment is also said to be one of the causes of the reduction of storage capacity of lakes and water bodies," the court said.

Last year, the National Green Tribunal (NGT) fined the government Rs 2 crore for a delay in removing encroachments along the Adyar and Cooum rivers in the city.

At full capacity, Cholavaram and Puzhal can hold over 4,380 million cubic feet (mcft) of water and cater to almost all of Chennai's water needs. Both are now almost dry, according to Chennai Metropolitan Water Supply and Sewerage Board.

The heatwave that is burning up Chennai hasn't helped, with temperatures regularly crossing 40 degrees Celsius this month and leading to increased demands on the already stressed water supply.

The combination of the heatwave and water shortages has placed Chennai on top of a WWF Water report of megacities at risk of drought and scarcity. The report ranks Kolkata at No 2 and includes Istanbul, Bangkok, Tehran and Los Angeles in the top 10.

Chennai was #1 on @WWFWaterRisk list of megacities at risk of drought & scarcity. Cities must become water stewards. Rest of top 10?

The WWF report mirrors concerns raised in a report released by the Niti Aayog earlier this month which warned that 21 Indian cities, including Chennai, Bengaluru and Delhi, could run out of groundwater by 2020 and 40 per cent of the country will have no access to drinking water by 2030.

The Tamil Nadu government announced last week that 10 million litres of water would be transported, daily, from northern parts of the state to Chennai at a cost of Rs. 65 crore.

Chief Minister E Palaniswami has acknowledged that a deficient monsoon has resulted in depletion of groundwater levels, but has claimed the issue is not dire as it has been described by the media.

93 Mumbai Cops Test Positive In A Day Amid Covid Surge