Shah Rukh Khan visited the Arthur Road jail in what was his first public appearance since his son Aryan Khan's arrest in a drugs case on October 3. 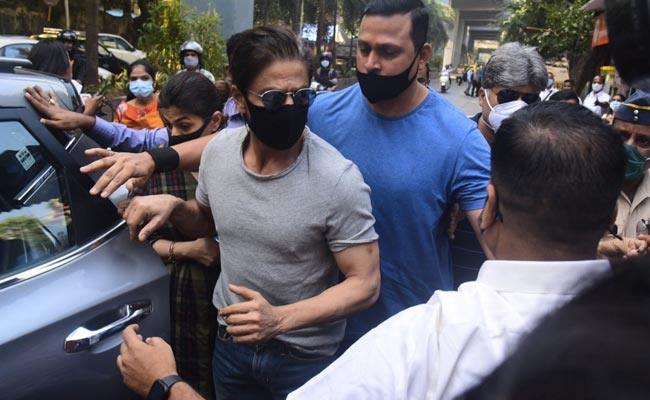 Caught by scores of cameras and jostling crowds as he came out of jail after meeting his son Aryan, Shah Rukh Khan on Thursday found support from several Bollywood colleagues who said they were heartbroken and also from fans who gathered in front of his home in a show of solidarity.

The superstar's visit to the Arthur Road jail in what was his first public appearance since his son's arrest in a drugs case on October 3 was followed by a team of Narcotics Control Bureau (NCB) officials visiting his home Mannat.

Though much of mainstream Bollywood maintained a studied silence, several colleagues, including filmmakers Alankrita Shrivastava, Hansal Mehta and actor Pooja Bhatt, spoke out in support of the family. The media also came in for some attack.

Aryan, 23, and seven others were arrested by the NCB after a raid on a cruise ship. On Wednesday, a special court rejected Aryan's bail for the second time. The case will now be heard by the high court on Tuesday

"My heart is broken for SRK. May there be light at the end of the tunnel," Ms Shrivastava, the director of "Lipstick Under My Burkha", said in a tweet.

My heart is broken for SRK. May there be light at the end of the tunnel.

Shah Rukh was mobbed by reporters, one of whom could be heard asking what he talked to Aryan about. The 55-year-old waded his way through a sea of people and got into his car without a word. He was seen greeting some people with folded hands in videos circulating on social media.

Commenting on a video of media hounding Shah Rukh as he made his way to the car, actor-filmmaker Pooja Bhatt said it was 'tragic'.

"Dear members of the press. I know times are tougher than ever & there is immense pressure on you'll from your respective employers to grab a byte even if it means compromising your own health & safety but how do you'll explain this pack like behaviour to your own children? Tragic."

Screenwriter Kanika Dhillon, who has been vocal in her support to the star, said it was "heartbreaking" to see the turn of events.

In another Twitter post, Ms Dhillon, who is set to collaborate with the actor in a film to be directed by Rajkumar Hirani, said in adverse times a parent who happens to be a star is subjected to "heartless abuse and ruthless judgement".

"Being a celebrity, being a star, being from 'Bollywood' means your emotion, your torment and your concern as a father become a matter of public consumption, heartless abuse and ruthless judgement," the "Rashmi Rocket" co-writer said.

Mr Mehta retweeted Ms Dhillon's post and wrote that the industry has always been vulnerable to criticism, scrutiny and abuse.

"Bollywood is not a place, not a company and definitely not some mafia. It is a loosely coined term for a large number of individuals who work really hard to create, to entertain, to engage and unlike many other professions are always vulnerable to criticism, scrutiny and abuse," the "Shahid" director said.

Being a celebrity, being a star, being from ‘Bollywood' means your emotion, your torment and your concern as a father become a matter of public consumption, heartless abuse and ruthless judgement.

He added that Bollywood has often become a "diversionary vehicle" for a few divisive, abusive and inefficient set of some cowardly invisible people.

Shah Rukh reached the prison around 9 am and left at 9.35 am after meeting his son for about 15 to 20 minutes. According to an official, there was a glass fencing between them and they spoke on the intercom. A few hours later, the NCB visited Mannat.

Taking a jibe at the NCB, Ms Dhillon asked, "Sohow are the reporters and cameras all set already for the 'officials' to make an entry and all captured at the 'right time' for the 'visit'?"

"Great co-ordination with the paps! Well done. Many in the show-biz don't manage this timing right!" she wrote as she shared a video from a news portal showing NCB officials at Mannat's entrance.

Actor Sonu Sood had a word of caution for the media.

"Before running after someone's feelings with a camera, remember, God's camera is sitting on you. Because not every news is news," the actor tweeted in Hindi.

The family has found ample support in SRK's fans too, many of whom said they empathised with him. After all, they had children too and this was one time when he was not just a star but a parent like them.

Like a bhelpuri hawker outside Shah Rukh's imposing sea front bungalow who was making a fast buck on a day so many media crews and fans had gathered.

"On a Thursday afternoon, we don't usually see so many people but it's packed. But it isn't that we are enjoying his (Shah Rukh's) misery. I also have a young son in Bihar, so I can understand what Shah Rukh must be feeling," Ram said.

Outside Mannat, a selfie spot for many tourists to Mumbai, a battery of mediapersons was stationed to catch any movement from the house.

A family of four from Bhopal took turns to click each other's pictures. Then finally, a family picture outside the gate after requesting a media photographer.

"We had heard that the place outside his residence is always crowded but we didn't expect so many media persons. The attention on him is obvious, he is a big star. But he will sail through," Rajesh, a businessman, said.

Prateek Solanki, an engineering student from the city, added that he has been visiting Shah Rukh's house since he was a child but the current times and the national spotlight on him is "heartbreaking".

"Aryan is almost my age. I can't imagine what he must be going through. But I'm praying everyday."

Another fan, Kuhu Goyal, said she had been standing outside Mannat since she saw visuals of Shah Rukh exiting Arthur Road Jail. She travelled more than an hour in a local train, from Virar to Bandra, to show solidarity.

"We stood by him through his highs and lows and this is possibly his lowest. The least we can do is stand by him now," the 25-year-old said.