As Nitish and Kejriwal Share Stage, a Double-Barrelled Attack on PM 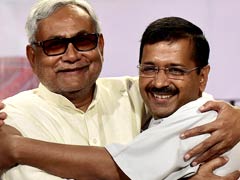 New Delhi: A whole lot of bonhomie and frequent swipes at Prime Minister Narendra Modi marked the coming together on a public stage of Arvind Kejriwal and Nitish Kumar in Delhi today. The two chief ministers held hands, hugged and showered praise on each other.

"The PM called me a Naxal before the Delhi elections, now he abuses the DNA of Biharis. The BJP is making the same mistakes in Bihar that they made in Delhi... They will fail again," predicted Mr Kejriwal, who became chief minister of Delhi six months ago after trouncing PM Modi's BJP, winning 67 of the capital's 70 seats.

"Delhi what you have done is absolutely right... Hold on to Kejriwal," said Bihar chief minister Nitish Kumar.

"During the Delhi elections Modi ji said - Delhi's mood is the same as the country's mood - and then 67 seats," Mr Kumar said, adding, "He must also understand the mood of the Bihari."

Bihar votes for a new government by November, and Mr Kejriwal has cast his vote firmly in favour of Mr Kumar, who goes head to head with the BJP in his state. Today the Delhi chief minister also made an  appeal - requesting the millions of Biharis in the capital to phone relatives in Bihar and ask them to ensure a Nitish Kumar victory.

He attacked PM Modi for the 1.25 lakh crore mega-package in central funds that he announced in Bihar yesterday, seen by the BJP as the game changer in the elections.  "If he has so much money, he should give some to the soldiers fasting for one rank one pension at Jantar Mantar, " Mr Kejriwal said.

Mr Kejriwal has said his Aam Aadmi Party will not field candidates in Bihar to ensure that the anti-BJP vote is not split. He is likely to visit Patna next month at the invitation of Mr Kumar.
Comments
Nitish KumarArvind KejriwalBihar electionsPM's Bihar electionsNitish and Kejriwal