Chief Minister Arvind Kejriwal and the AAP are seeking re-election after recording a massive win in 2015; the party won 67 of 70 seats in the Assembly

Delhi Chief Minister Arvind Kejriwal set his AAP (Aam Aadmi Party) an ambitious goal should the party win re-election in Assembly polls expected later this year - to clean up the polluted Yamuna River. "I will be among the first to take a dip in it within next five years," the Chief Minister said at a NDTV townhall meeting this evening. Mr Kejriwal also listed clean water, ensuring safety of women and improving public transport as some of his government's key priorities. The Chief Minister also said he was proud that his government had worked "with complete honesty to make the lives of Delhi's citizens better".

"(I) promise to clean Yamuna. I will be among the first to take a dip in it within next five years," Arvind Kejriwal said today, adding that it was a "big priority" for his government. "All sewer waste and all have been identified and we will clean in 5 years and before the next to next polls we would have cleaned Yamuna so much you can bathe in the Yamuna".

"I am proud... can say with complete honesty that we have worked to make the lives of Delhi's citizens better... something which has not been done in 70 years. We will continue to work for the people after coming back... provide clean water, clean up the Yamuna, tackle pollution and (improve public) transport," he added.

The Chief Minister was questioned on a wide range of subjects, including nationwide protests against the controversial citizenship law, ensuring the safety of women - something the AAP has stressed on, with Mr Kejriwal recording messages on popular radio channels in the city. 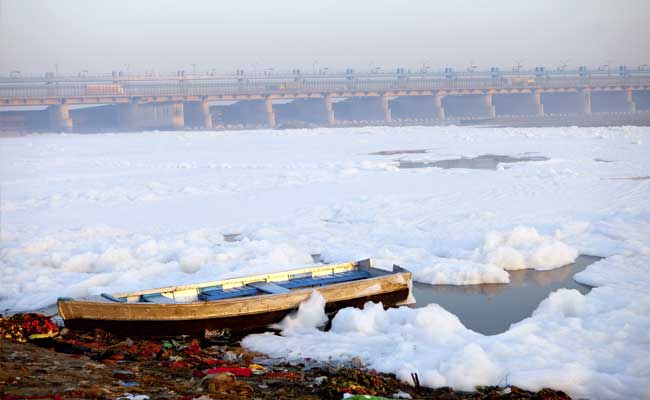 A shot of the Yamuna River covered in toxic foam (File)

"We are worried for safety of women. It is very scary what happens daily to little girls. We have to get into war mode and have to do our roles... all of us - government and civil society," he said, noting that 1.5 lakh CCTV cameras had been set up across the city and another 1.5 lakh was being planned.

Mr Kejriwal said today that the increase in CCTV cameras on buses was a further example of ensuring women's safety, and added it was necessary to improve "last-mile connectivity" with minibuses.

The Chief Minister also called out the Delhi Police, which is under the control of Union Minister Home Amit Shah, and said it needed to improve its public image.

"People are scared to go to (the) police... the police is ours, the country is ours, the Army is ours, the centre is ours. We give Rs 1 crore compensation (referring to the firefighter who died fighting a massive blaze in Peera Garhi in West Delhi yesterday)," he said, claiming that he had often seen girls and women approach cops "but they don't take action ASAP... they have to take action ASAP".

Chief Minister Kejriwal and the AAP are seeking re-election after recording a massive win in 2015; the party won 67 of 70 seats in the Assembly. The party launched its campaign last week, with Deputy Chief Minister Manish Sisodia saying he was confident of success. The party also revealed its slogan - 'Ache beete 5 saal, lage raho Kejriwal (Past 5 years have been good, keep going with Kejriwal').