Arvind Kejriwal has launched his own mobile application to stay in touch with the people and share the truth. The app goes by the name "Arvind Kejriwal" and can be downloaded from Google Play Store. 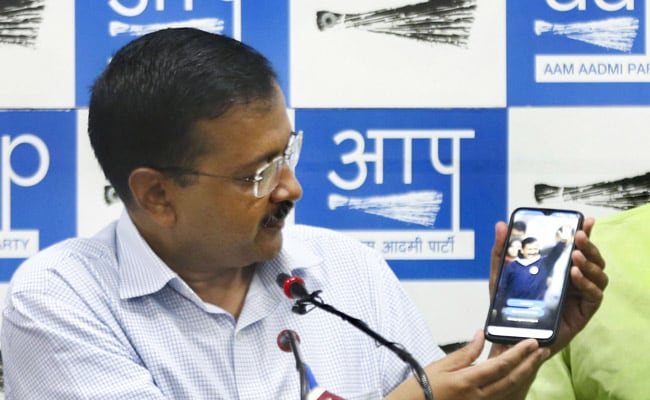 The app goes by the name "Arvind Kejriwal" and gives exclusive access to Chief Minister's events.

Delhi Chief Minister Arvind Kejriwal today launched his own mobile application to stay in touch with the people of the city and the Aam Aadmi Party volunteers.

"Whenever there's an attempt to spread false propaganda against us, we'll share the truth thru the app (sic)," the AAP chief wrote on Twitter.

Latest news abt AAP & what makes Delhi Model of governance so impactful. Whenever there's an attempt to spread false propaganda against us, we'll share the truth thru the App#DownloadAKapphttps://t.co/6D9XOD9D2Gpic.twitter.com/xzRne7yCei

The Arvind Kejriwal app, or the AK app, is available in English and Hindi and shows the journey of the Aam Aadmi Party, its achievements and struggle.

The app, which goes by the name "Arvind Kejriwal", will also give exclusive access to Delhi Chief Minister's public events and LIVE TV. It can be downloaded on Google Playstore and will soon be available on ioS.

"From fighting the ration mafia in the slums to setting world-class standards in governance, the AK mobile app has captured it all," the Aam Aadmi party shared on its Twitter handle, pitching the app as the story of the party's struggles.

Some interesting feat. of the AK Mobile App!

Party leaders also cheered on the AK App and encouraged the users to download it.

"The AK App is here for you to find out about the work done by the AAP govt in every field. What a proud moment it was when the Harvard studied the initiatives of the SMCs in Delhi Government schools!" AAP leader Atishi tweeted.

The Arvind Kejriwal app describes the Delhi model of governance in detail and describes in detail about the party's achievements in sectors like education, transport, healthcare, economy, women empowerment, among others.

The Aam Aadmi Party swept the Delhi Assembly Polls in 2015, winning 67 of the 70 seats. The next Delhi Assembly Elections will take place early in 2020 to elect 70 members of the legislative assembly.