Watch: Arvind Kejriwal, Bhagwant Mann "Back To School" For "Mindfulness"

The visit was part of Bhagwant Mann's much-assailed trip to the capital to take notes on the Aam Aadmi Party's work in education and healthcare in Delhi. 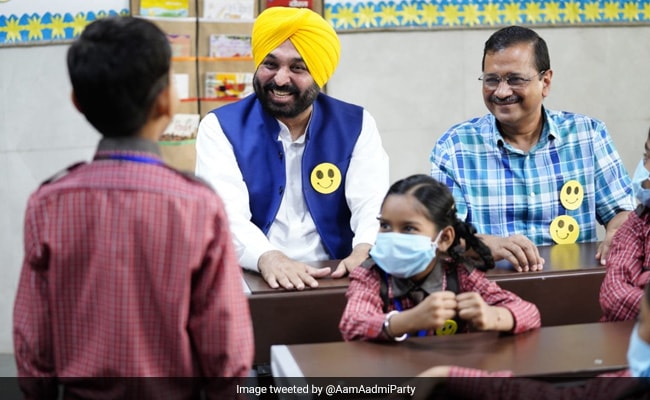 Delhi and Punjab Chief Minister Arvind Kejriwal and Bhagwant Mann were seen attending a "Mindfulness Class" in a Delhi school on Monday.

The visit was part of Mr Mann's much-assailed trip to the capital to take notes on the Aam Aadmi Party's work in education and healthcare in Delhi.

A video of the session posted by the party showed the two politicians enjoying themselves while Mr Mann, a former stand-up comedian, drawing laughter for his responses.

The Punjab government will replicate Delhi's education model in the state, where students from all economic backgrounds will get quality education, Bhagwant Mann said.

Mr Mann, who is on a two-day visit to Delhi along with his senior officers, toured health institutes and schools in the national capital to understand the "Delhi model" and replicate it in the state.

"The revolution in the education system is discussed across the country. We will replicate the same model in Punjab, where students from either rich or poor backgrounds will get a quality education together. The country will progress this way by learning from each other," Mr Mann said.

Mr Kejriwal said, "Let us work together to strengthen the education system of the country".

The Punjab Chief Minister is accompanied by a battery of senior officers from both school education, and health and family welfare departments, to take input on the two crucial sectors.