The new train, known as 'Arunachal Express' would cover the 2013 kilometre distance between Naharlagun and Anand Vihar Terminal in little over 38 hours and would have 14 stoppages en-route. 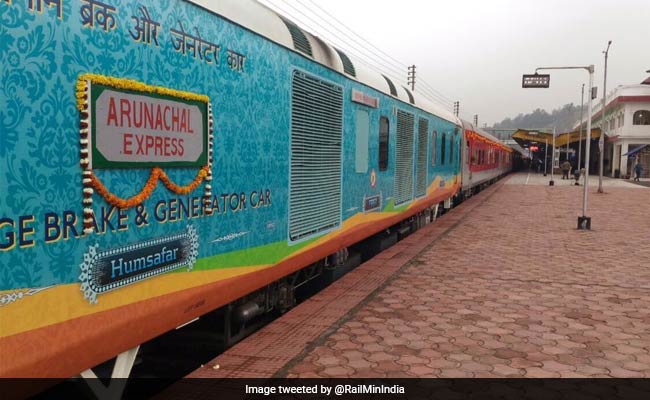 This is the second direct train for Arunachal Pradesh to Delhi

Itanagar: A new train between Naharlagun in Arunachal Pradesh and Anand Vihar Terminal in the national capital was today flagged off by Union Ministers Kiren Rijiju and Rajen Gohain.

Speaking on the occasion Mr Rijiju, the Union Minister of State for Home said "This is the beginning. Arunachal Pradesh is poised for a giant leap in the developmental front with survey of 11 railway projects in the state going on which, will change the face of the state soon."

"New Delhi is willing to work for Arunachal Pradesh but the problem lies with the state as the state government has failed to clear land acquisition process for any important project," he said and added that there was no dearth of fund from the Centre.

Mr Rijiju requested Mr Gohain, the Minister of State for Railways to provide railway jobs to the youths of Arunachal Pradesh in all categories as per laid down norms.

The new train, known as 'Arunachal Express' would cover the 2013 kilometre distance between Naharlagun and Anand Vihar Terminal in little over 38 hours and would have 14 stoppages en-route.

With all air-conditioned LHB (Linke Hofmann Busch) coaches, the train would offer all comfort and facilities to the passengers, NFR general manager Lokesh Narayan said during the flagging off ceremony.

This is the second direct train for Arunachal Pradesh and 14th for North East to connect with the national capital.

Prime Minister Narendra Modi during his visit to Itanagar on February 15 last had announced increasing the frequency of the Naharlagun-New Delhi AC Express train from one day a week to twice and to rechristened it as the 'Arunachal Express'.

Arunachal Pradesh Deputy Chief Minister Chowna Mein speaking on the occasion stated that development process had begun for Arunachal Pradesh with BJP-led NDA government at the Centre attaching priority to Northeast considering it as the Engine of Growth for the country.

"The Centre is ready to help Arunachal Pradesh and we should take advantage of various projects like industrial corridor along the foothill areas of the state and frontier highway along the international border," Mr Mein said.

Promoted
Listen to the latest songs, only on JioSaavn.com
Lok Sabha MP from Arunachal East constituency Ninong Ering requested Gohain to initiate measures for construction of railway lines along the international border to answer China s infrastructure development in the border.