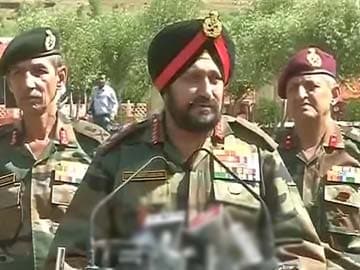 Army Chief General Bikram Singh paid tribute to the martyrs of the 1999 Kargil War on the occasion of 15th Vijay Diwas on Friday.

Jammu: Indian Army Chief General Bikram Singh on Friday paid tribute to the martyrs of the 1999 Kargil War in Jammu and Kashmir's Ladakh region on the occasion of 15th Vijay Diwas.

General Singh, who is retiring on July 31, paid homage at the Kargil war memorial in the Drass area.

"I want to assure you as chief of the army staff that the Indian Army is deployed at the border and has the capability to protect India's sovereignty and integrity," General Singh told the media.

He added that the army is "fully geared to take on challenges" and that the present government is committed towards ensuring the needs and aspirations of the soldiers.

Each year since 1999, the army observes Vijay Diwas to remember its soldiers who laid down their lives in Kargil district in the cold desert region of Ladakh during the conflict between India and Pakistan.

Promoted
Listen to the latest songs, only on JioSaavn.com
The Kargil conflict was the most serious military engagement between the two neighbours since the war of 1971 that resulted in the division of Pakistan into two countries and the creation of Bangladesh.