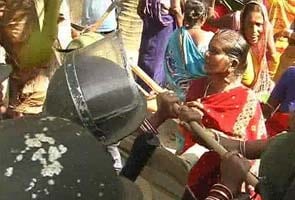 Bhubaneswar: Mostly frail women, old and young, stood up to the blows that the police rained on them with canes, some of them stripping partially in protest. Several of them were injured in the lathicharge but the undeterred women of Odisha's Govindpur and Dhinkia villages have threatened to strip en masse if the police is not withdrawn from their area immediately.

As the world celebrates Women's Day, these village women are engaged in a bitter tussle with the administration to stop land acquisition for the Posco steel project. They also want the five platoons of police still deployed at the site of the proposed mega project in Jagatsinghpur district withdrawn.

The state government had resumed land acquisition, which involves clearing betel plantations in the villages, four days ago. The drive began only hours after three anti-Posco protesters were killed in a bomb attack. The activists allege that supporters of the Posco plant were behind the attack.

The women who clashed with the police on Thursday  belong to the Posco Pratirodh Sangram Samiti ( PPSS ), which has spearheaded the anti-Posco agitation for the last eight years. They said hundreds of them would strip if their demands are not met.

Posco is a South Korean company that proposes to set up a 12-million-tonne-per-annum steel plant near the port town of Paradip in Odisha. It is the largest foreign investment in India.

The government says it has acquired about 2,000 acres of land in the region in 2011 and needs to acquire another 700 acres, mostly in Govindpur area, for the project. It says the villagers have agreed to the land acquisition. But the villagers deny this and the stand-off has continued for some time now, with the administration being forced to abandon land acquisition activities every now and then.

Promoted
Listen to the latest songs, only on JioSaavn.com
It had stopped clearing plantations on February 6 in the face of a stepped-up agitation. During their protests, the villagers have also fronted children.