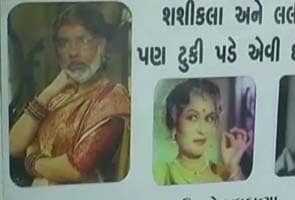 Ahmedabad: In Gujarat, new posters critical of Mr Modi have appeared in Rajkot, 200 kilometres from the state capital of Gandhinagar. The Gujarat chief minister is lampooned - his face has been morphed with that of a woman, and is shown alongside Bollywood actors Shashikala and Lalita Pawar, whose careers were built on their vicious depictions of angry and conniving spoilers, determined to drive a wedge between the ingenue lead and her love interest.

The slogans on the posters suggest that like them, the Gujarat chief minister is creating fault-lines within his party.

Posters have been appearing against Mr Modi for the last few weeks - in cities like Ahmedabad, Nagpur, Lucknow and in Delhi, outside the BJP office. Nobody has accepted responsibility for them.

Those close to Mr Modi believe they are the work of a group loyal to Sanjay Joshi, who has long served as one of Mr Modi's least-favourite people.  It was at the chief minister's insistence that Mr Joshi resigned first from the party's national executive, and then later, from the BJP.

Promoted
Listen to the latest songs, only on JioSaavn.com
The dissent against the chief minister has been peaking, worryingly for his party, just months ahead of Gujarat's election.  Keshubhai Patel, a senior leader who was replaced as chief minister by Mr Modi, has been meeting with other Modi critics like Suresh Mehta.  In a blog earlier this week, Mr Patel wrote that Gujarat today is worse than the Emergency.  Mr Patel and others have accused the chief minister of being autocratic in his decision-making, and intolerant of any criticism.