Another Night Of Farmer Protests - At Delhi's Edges And Beyond Them

The tension persisted with restless crowds milling around the city's edges and beyond and settling down from another night out in the cold. 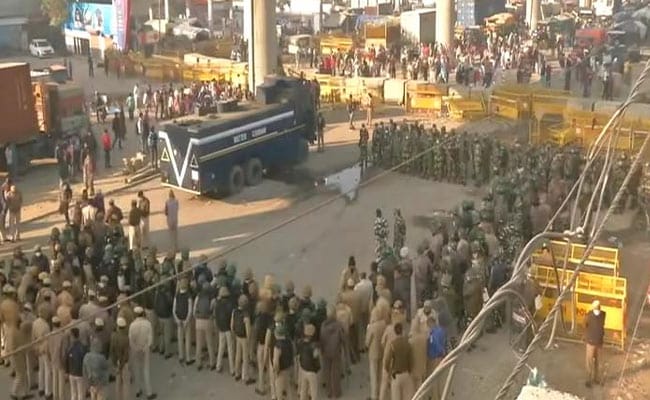 Farmers' protest: After a restive Friday, it was a quieter Saturday.

Thousands of farmers dug in their heels at Delhi's border points, their numbers swelling through the day as many more joined them, and hundreds gathered at the city's Burari grounds on Saturday, disparate but united in their determination to hold protests against the new farm laws.

After a restive Friday that saw police using teargas shells, water cannons and multi-layer barriers to block the protesters and some farmers pelting stones and breaking barricades in their determination to push through as part of their 'Delhi Chalo' march, it was a quieter Saturday.

But the tension persisted with restless crowds milling around the city's edges and beyond and settling down from another night out in the cold.

Though there was no clear roadmap, the farmers, belonging to multiple groups, including 30 from Punjab, appeared clear in their resolve, some saying that they would not disperse till the laws were repealed and others that would ensure their voices are heard. They were mostly from Punjab and Haryana but also from Madhya Pradesh, Uttar Pradesh and Rajasthan.

At the Singhu and Tikri borders, thousands of farmers in trucks, tractors and other vehicles who had braved the water cannons and batons and had been there for three days, refused to budge. As police personnel swarmed the area, many said they would not go to the Sant Nirankari ground in Burari that was offered to them for peaceful protests.

Settling down for another night on the road, some said they would wait for the outcome of a crucial meeting on Sunday to decide the next course of action.

" Tomorrow, there will be another meeting at 11 am. Till then, we are at Singhu," said Baljeet Singh Mahal, the Jalandhar unit president of the Bhartiya Kisan Union Kadia.

"We have still not decided on going to the Burari ground. We will have a meeting in the evening to decide the next course of action," Bharatiya Kisan Union (Rajewal) president Balbir Singh Rajewal told PTI over the phone.

Another faction, the Bharatiya Kisan Union (Ekta-Ugrahan), one of the largest farmer organisations in Punjab, agreed that they would not go to Burari. The faction's leaders claimed that over one lakh farmers, including elderly women, were marching towards the national capital in tractor-trailers, buses and other vehicles.

Numbers swelled at the Singhu border point, one of the main access points into the capital from Punjab, and at Tikri a few kilometres away.

"We will continue to protest here. We will not move from here. Several other farmers are yet to join us from Haryana. They are on their way," said Sukhwinder Singh, who had been camping at Tikri since Friday evening.

He was clear in his ask.

"We want to go to Jantar Mantar and hold a peaceful demonstration there. Meetings are being held, and until the next course of decision is taken, we will continue to protest here at the border peacefully."

Jagtar Singh Bhagiwander, another farmer at Tikri, said the effort was to separate the groups.

"Yesterday, soon after we were granted permission to enter Delhi, we were told to move ahead in groups of 50 people one after the other. If we have come together all the way crossing different borders, we will continue to stay united," he said.

The farmers came prepared for a long haul, their vehicles loaded with rations, utensils, quilts and blankets for the cold and equipped with even charging points for their phones.

"We will not return till the Centre scraps the new farm laws," a protesting farmer said.

Some farmers from Uttar Pradesh gathered at the Ghazipur border too, ready to join in. Elsewhere in Uttar Pradesh, over 500 farmers staged a sit-in at the Jhansi-Mirzapur National Highway in Kulpahad to demand the rollback of the three laws.

Though many groups were unwilling to go to Burari, hundreds of farmers did make their way to the ground where the government had allowed them.

Joint Commissioner of Police (Northern range) Surender Singh Yadav told reporters that around 600 to 700 farmers had reached Burari and hoped that more would go.

Among those at Burari was Bhuvan Singh Yadav, who started his journey on November 24 from Gwalior in Madhya Pradesh via Rajasthan and Uttar Pradesh, along with several other members of the All India Krishak Khet Majdoor Sangathan (AIKKMS).

"We were stopped by the UP police at the Rajasthan-UP border on a bridge, but we did not go back. We continued to protest on the bridge, even when it started raining in this cold. Eventually the police had to give in," he said.

"Hum sawaal lekar aayein hain, aur jawaab lekar jaenge, (We came with a question and will return with an answer)," he said.

The unprecedented unity of the farmers will put pressure on the government to withdraw the three anti-farmer acts, social activist Medha Patkar, who was at Burari with a group of men and women, told NDTV.

She said it was a decentralised movement and the protest was against the vulgar inequity in the country.

The three farm laws are - The Farmers' Produce Trade and Commerce (Promotion and Facilitation); The Farmers (Empowerment and Protection) Agreement of Price Assurance; and Farm Services and The Essential Commodities (Amendment).

Farmers say they are apprehensive that the laws will pave way for the dismantling of the minimum support price system, leaving them at the "mercy" of big corporates.