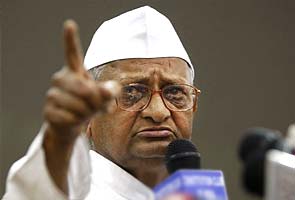 In a statement issued today, the Gandhian activist also appealed to ensure a 90-plus per cent voting in the elections. In the appeal, aimed mainly at anti-corruption activists in Maharashtra, Mr Hazare said, "There is no need to form any party or to contest elections, but to provide an alternative to the people.

"Only the people have the power to transform and we have to undertake the work of awakening them," Mr Hazare said, adding that voters should elect right candidates in Assembly and Lok Sabha elections.

Around 4,000 activists from all over the country have come forward for this task, and from Maharashtra, activists with "national and social perspective" are needed, he said.

Promoted
Listen to the latest songs, only on JioSaavn.com
"One thing that is being felt strongly is if the anti-corruption agitation continues in a limited manner of perusal of complaints and a few people getting justice, then there will be no difference between this movement and a complaint redressal centre," he said.