N Chandrababu Naidu, while leaving for Tirupati, stopped at a city hotel where HD Kumaraswamy was staying and held a meeting with him for about 40 minutes. 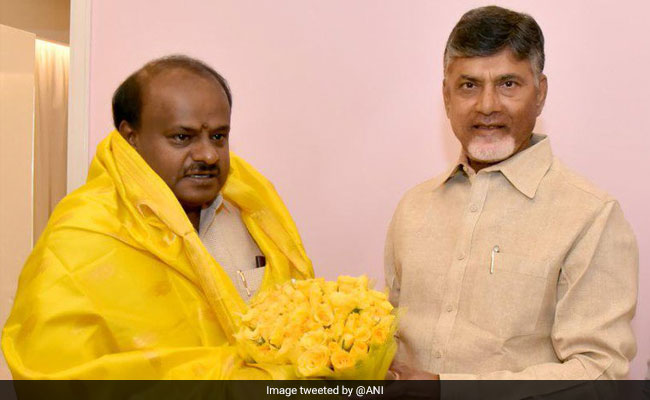 Andhra Pradesh and Karnataka Chief Ministers N Chandrababu Naidu and HD Kumaraswamy on Friday discussed a host of political issues, essentially the need for bringing regional parties together and defeating the BJP-led NDA at the Centre.

HD Kumaraswamy arrived in Vijayawada this morning to worship Goddess Kanaka Durga, the presiding deity of the historic city, atop Indrakeeladri.

N Chandrababu Naidu, while leaving for Tirupati, stopped at a city hotel where HD Kumaraswamy was staying and held a meeting with him for about 40 minutes.

A communique from the state Information and Public Relations Department said the two chief ministers discussed the need for regional parties coming together, more so in south India.

N Chandrababu Naidu and HD Kumaraswamy expressed the opinion that all regional parties in the south should come on to a single platform. They also discussed the need for an alternative force at the Centre, the communique said.

"These issues were discussed only for a brief time. There is need for an elaborate deliberation on this," the communique quoted Mr Naidu as saying at the end of the meeting

The Karnataka chief minister later told reporters that both the TDP and the JD(S) shared a brotherhood and their common objective was to defeat the NDA at the Centre.

"Defeating the NDA and saving the nation is our main aim. It's not important who will be the (next) PM candidate," HD Kumaraswamy said, in reply to a question.

He said they would try to rope in as many regional parties as possible.

"We have discussed this issue many times so far. Our meeting today was a continuation of that," he added