This is the first time that N. Chandrababu Naidu and his family members cast their votes in the new state of Andhra Pradesh. 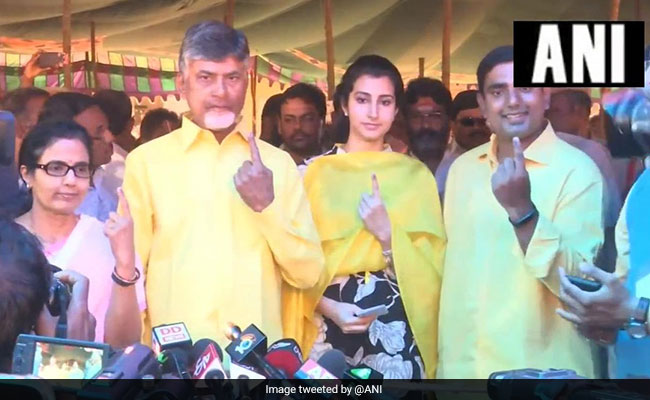 Chandrababu Naidu and N Lokesh said every voter should exercise his democratic right.

After coming out of the polling booth, they showed their inked fingers to the media persons.

Mr Naidu and Mr Lokesh said every voter should exercise his democratic right.

"It is the duty of every citizen to participate in the democratic process by casting his vote," said Mr Naidu.

Mr Lokesh, who is making his electoral debut, is the party candidate from Mangalagiri while Mr Naidu is seeking re-election from Kuppam in his native Chittoor district.

This is the first time that Mr Naidu and his family members cast their votes in the new state of Andhra Pradesh. In 2014 elections, they had voted in Hyderabad, then capital of undivided Andhra Pradesh.

A couple of months after the 2014 polls, the bifurcation of Andhra Pradesh was formalised with the creation of Telangana state with Hyderabad as its capital.